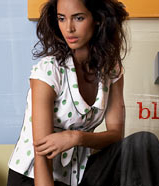 I bought this blouse from Anthropologie as a present to myself. I was dying for a few other things, but I stopped at the blouse. It was a hard. I’m in a frenzy of want, want, want, apparently. Wanted this pair of linen pants, a new pair of jeans, a Spring cardigan. (The males have stopped reading by now. Oh! Now we can talk about them!)

– I want people to be more courteous on the street.
– I want cars to stop going through red lights.
– I want people to stop treating elections like baseball games and hating the fans of the other team.
– I want a flatter stomach.
– A chihuahua.
– I want my book to be a best seller, of course. Had to throw that in there.
– A great new take-out restaurant to open within blocks of my apartment.
– I want the perfect haircut (this doesn’t exist, does it?).
– I want Joss Whedon back making TV shows.
– As long as I’m on the subject, I want Buffy the Vampire Slayer back. (Sob.)

That reminds me, I was trying to think of how to phrase something like “world peace” and I remembered Howard trying to cheer me up when I was bemoaning all the hate in the world. He was saying how slowly, over the centuries, as much hate and war as there is, there is actually less, and we’re slowly slowly slowly improving. He brought up a lot of convincing examples to prove it (slavery, women’s rights, etc.) and I was once again wondering if perhaps it’s true.

Reach Out in the Darkness

Who sang it better: Maria Callas or Renata Tebaldi?

6 thoughts on “I Need a Shopping Spree”