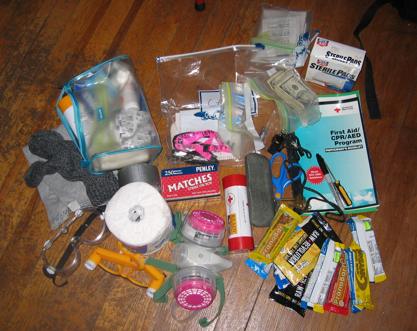 – T-shirt.
– Socks.
– Goggles.
– Goggles with lights.
– Flashlight. (Actually I moved that to my daily backpack after seeing the movie Cloverfield. Now, when a monster rampages New York and I am hiding in a subway, I will be able to see the smaller monsters that fell from the big monster when they come after me.)
– Toilet paper.
– Duct tape.
– Face mask thing.
– Matches.
– A tube of first aid stuff that they gave away at some City thing I went to on emergency preparedness. Not sure what is in there. It will be a surprise.
– Extra pair of glasses.
– Scissors.
– Screwdriver.
– Sharpie pen.
– Power bars.
– First Aid manual.
– A whistle.
– $100 in mostly small bills, because stores may not have change in an emergency.
– Gauze pads.
– A plastic bag containing info about my cats, out-dated forms that say they had their rabies shots (must get current forms) and a list of hotels that take cats.
– Tags with my cats name on them and my name and cellphone number.
– A plastic bag with info about me, birth certificate, social security number, phone numbers of family, friends, doctors.
– First aid kit, the zipper on the bag is broken. It’s got prescriptions, girl stuff, sun block, toothbrush, floss, Motrin, more gauze, bandaids, and lots of Imodium because my worst fear in a terrorist attack or tornado is to have bathroom issues and no bathroom.

I used to have an extra pair of sneakers and a pair of jeans in there, but I don’t currently have extra sneakers or jeans to spare.

3 thoughts on “The Contents of My Go Bag”