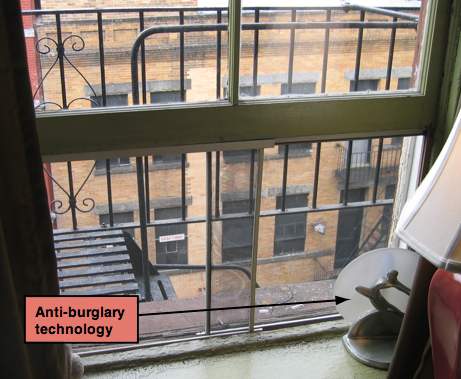 Okay, so according to the Times, “Community leaders are keeping their eyes peeled in Greenwich Village, where burglaries in the Sixth Precinct have increased 26.2 percent. There have been 130 burglaries so far this year, 27 more than last year at this time.”

Beth, who lives on my floor, said there were signs on the street saying that they are breaking in via fire escapes. I have a fire escape outside my window. So what I did was put a lamp in the window, hoping that a thief is going to avoid the window that has a light shining out on him. Light from a pretty little art deco lamp that I bought at a store on Hudson Street about 30 years ago, a store which no longer exists, of course.

It doesn’t look very intimidating, does it?

A perfect 10 for Foot Extension