I read ugly comments on Facebook from people who are not happy that Barack Obama is our president, and from gun owners, many of them likely completely reasonable people, who won’t agree to perfectly reasonable responses to all the gun death in our country — even last night, on the live chat between people watching Eldad Hagar and Shaggy, people were fighting about how to care for Shaggy. Not simply disagreeing, but getting nasty and personal.

People are insane. It’s not enough to have a big heart, or a big brain. I mean, look at freaking Thomas Jefferson, the man who wrote that we all have the right to life, liberty, and the pursuit of happiness. He was not only a slave owner, he was apparently not a kind slave owner, completely unable to have any compassion for his slaves who were desperately seeking a little life, liberty, and the pursuit of happiness themselves (see the new biography, Master of the Mountain: Thomas Jefferson and His Slaves).

Jefferson wrote this in a letter to Samuel Kercheval:

“I am not an advocate for frequent changes in laws and constitutions. But laws and institutions must go hand in hand with the progress of the human mind. As that becomes more developed, more enlightened, as new discoveries are made, new truths discovered and manners and opinions change, with the change of circumstances, institutions must advance also to keep pace with the times. We might as well require a man to wear still the coat which fitted him when a boy as civilized society to remain ever under the regimen of their barbarous ancestors.”

Such mind-blowingly visionary words! What hope is there for all of us when the man who wrote them is the same man who put his child slaves to punishing work, allowing them to be beaten and mistreated? How hard was is it to see that was wrong?

I’m watching the series on PBS now about abolition. When I see how horribly the first people to call for the abolition of slavery were treated, something so clearly and obviously wrong, it’s less surprising to see people, many of whom are completely decent people and not idiots, fighting over reasonable gun control, gay marriage, or how to care for a frightened dog.

The tearing up of Perry Street continues. They were working last night, and they started up again at least as early as 7am this morning. 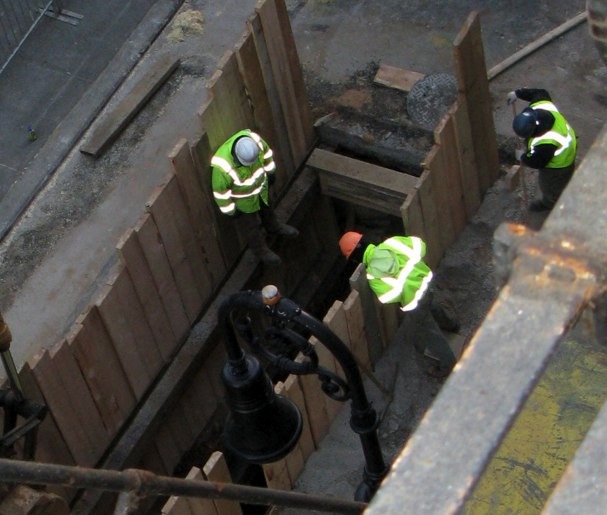 The downside of being a writer: reviews

7 thoughts on “Understanding How We Got Here”