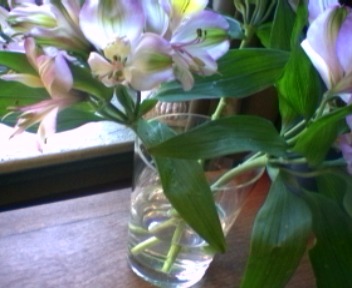 First, thank you Susan Brownmiller for the great party last night.  Susan threw a party for me (thanking me for Echo) and Jackie (her birthday). Great food, great company, saw a bunch of people I haven’t seen in a while.  But of course I didn’t have a camera to take pictures to show you.

Then, yesterday, on my way to the gym there was an explosion on 13th Street.  A big boom, the ground shook, the area filled with smoke!  A tourist bus happened to be there right then and I wondered if they thought, “So this is New York.” There was a second smaller boom shortly after, the place was filled with firemen and cops.  But of course I didn’t have a camera to take pictures to show you.

Very frustrating.  I think my camera might arrive tomorrow.  Can’t wait.  I took this picture of the flowers on my desk with my isight camera.  But man, not having a camera at the party was particularly hard.  One, I would have liked to take have been able to take pictures of the people there to prove I have friends, and two, you just wouldn’t believe the view Susan has.  She has this wrap-around terrace on the top floor of her building and it’s mind-blowingly paranoramic of downtown/West Village Manhattan.

Explosion Info:  It was from an electrical fire underground.  One of the explosions was from a manhole cover blowing.  I don’t know about the second, smaller one.

Shooting in the West Village

Jon Oliver and I Have the Same Idea …