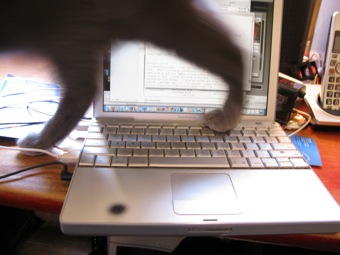 Okay, fine. You done now? Got where you want to go?

I’ll just get back to work here, where I was TYPING.

I had someone’s screenplay set aside to read.

Set aside, apparently, where Buddy planned to nap.

He just did a little adjusting. 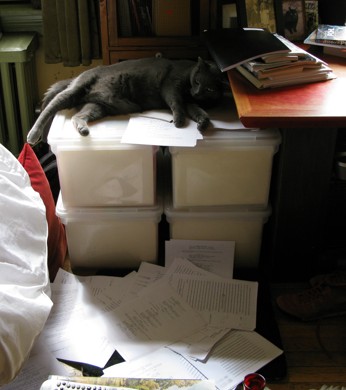 Today is Brazilian Day in New York, and every year they close off 46th Street and parts of 6th Avenue and have an all day party.  My band always plays the entire afternoon, it’s quite the marathon.  By the end of the day your arms are dead and your fingers are bleeding (sometimes).

I’ve never missed it, but I have to say, I am feeling lazy.  I’d kinda like to watch.  But I know if I go and don’t drum I’ll be miserable.

That reminds me, I tried out the spinning bike at the gym and loved it. It will probably get tiresome like everything else, but for now, it was a nice change of pace and it was a helluva workout.  I was only on it for a minute and a half and I was dying. But I read up on it last night and you’re supposed to vary the workout, both in speed and resistance.  Next time.

Too Beautiful to be Real