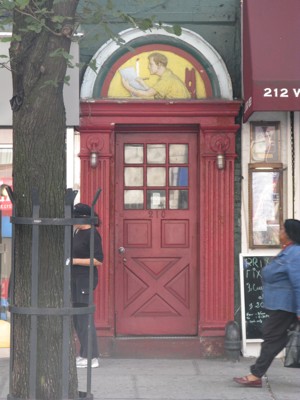 I used to actively avoid 14th Street.  If I had to go east or west around there I’d take 13th or 15th. Those blocks are prettier.  14th was mostly 99 cent stores, or bargain clothing stores, or bargain luggage stores, and with few exceptions, not a lot of great architecture. I just thought it was ugly and depressing.

At a certain point I stopped avoiding it, and while it’s still not pretty and it’s still mostly bargain stores, it doesn’t depress me anymore.  Plus, my bargain gym is on 14th.

So I’m walking home just now and I think, okay, there are pockets of prettiness, a nice building here, a nice doorway there, like this one.

I looked up the address when I got home and freaking Marcel Duchamp lived there from 1942 until he died in 1968. How can that be? We had him that long, and so close (to where I live I mean)??  I had no idea.  According to Wikipedia he died in France though, but did live in a Greenwich Village studio for many years.  So maybe he didn’t die here, but he lived here a long time and produced his last work of art here, years after everyone thought he had stopped making art.

Working on my Day Off