This was taken from the conference room window of the September 11th Families Association offices where we began our training.  It’s amazing how unchanged that hole looks after all these years. 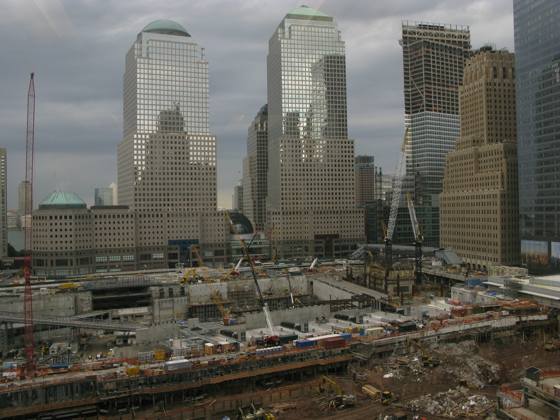 This was from the World Financial Center (I think), directly opposite the last shot.  That’s St. Paul’s Chapel, and the clock I pointed out a month or so ago where I was told the terrorists stood and watched the aftermath of the 1993 bombing of the World Trade Center. 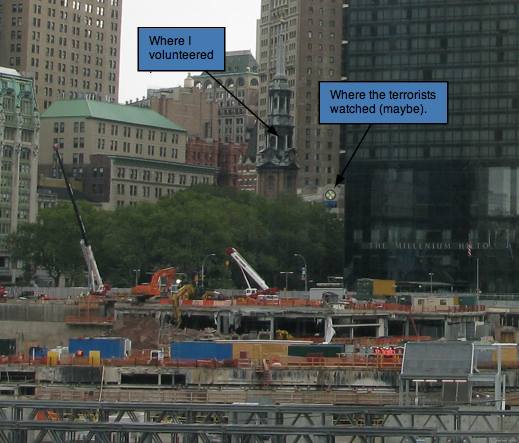 The remnants of flowers someone put up on the fence surrounding the site. 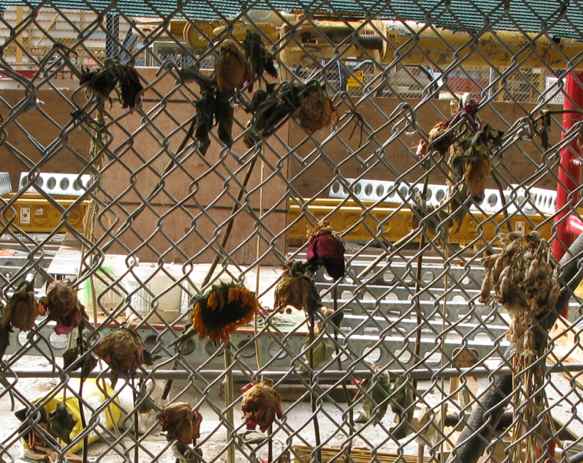 And below is the docent giving us the tour that we will one day give.  But every tour is different. They’re given by rescue workers, volunteers, family members of the victims, and people who lived in the neighborhood, and woven through the general story of what happened is their own personal story.  They call it Person to Person history.  When this guy told his very moving story (we’re not supposed to use the docent’s names) I had the pleasure of hearing a tiny bit of my own story from his point of view, completely by coincidence.

During training, a retired cop told her story, fighting tears.  However, over dinner the night before, her stories had a completely different flavor.  I meant to tell her to work this one story into her tour.  She had worked in that neighborhood in the 80’s and she was chasing a burglar down Liberty Street by the Trade Center.  It was night so the place was a ghost town.  Now there’s a firehouse right there so she pulled an alarm and the guys come out, horns blazing, “where’s the fire.” She was cracking me up, the way she told the story. When she told them there was no fire, but help me catch this guy, they were like, “hey, no fair!” You tricked us!  But they all grabbed whatever it is that those guys use, axes, halligans, and they helped her chase the burglar.  You have to hear the story from her.  It really captured the character of the city and the people and the neighborhood and it just made her later story all that more poignant.  I meant to suggest that she begin her tour with that story.  That firehouse is still there.  And who knows, sadly, what happened to the guys that helped her that night.  Some of them would have moved up the ranks and been in command, and a floor full of commanders were wiped out that day.

If you think this is something you’d like to volunteer to do, or if you would like to take one of these tours, you can find information on the Tribute WTC Visitor Center website. (Hi Lee, Jen, Wendy, Dave, Tracy and Thandi!)

I’m tired though, and I’m going to go curl up and watch all the tv I’ve been recording for the past week.  But I have some news about the Bruce Kremen story I want to tell later.  Bruce Kremen is the boy who went missing in 1960 and who I’ve written about here (and whose story will be in my book). 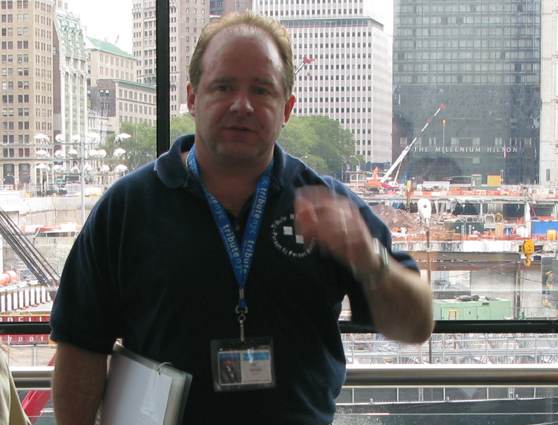