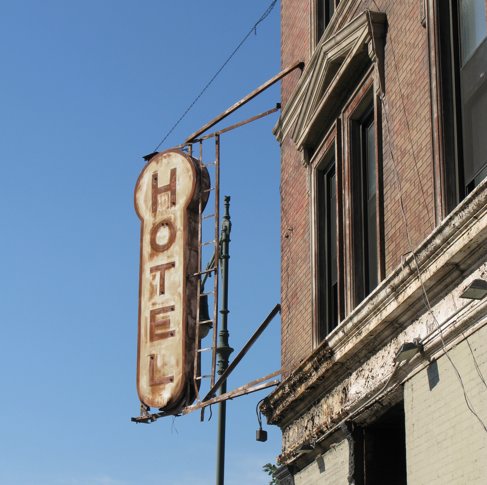 I’ve posted about this building before.  It sits on West Street at Barrow and I’ve had fantasies of buying it and turning it into a retirement home for me and my friends.

But someone else bought it and started renovations, so it’s a dream that will never come true alas.  Also, it was declared a landmark apparently, so yeah, like I ever could have afforded it before but now, forget it.  The renovations stopped a while back though, I wonder what’s happening?

I googled it and got a ton of information about its history, especially here, in a report prepared by the Landmarks Preservation Commission. There are some great photographs at the end, going back as far as 1929.  I tried to capture them and put them here, but couldn’t.

It was the Knickerbocker Hotel until 1910.  Now there’s a word you don’t hear anymore, but so many New York things were named knickerbocker for so long: hotels, bars, newspaper columns, sports teams.  It’s out of fashion now.  After the Knickerbocker closed it became the New Hotel Keller, and then Keller Abington Hotel and since 1993 it’s been shortened to the Hotel Keller (although on the notices plastered on the door it’s referred to as “Keller Abington Hotel”). The bar at street level was a gay bar from 1956 – 1998.  No mention of where the name Keller came from.  The owner wasn’t named Keller. The new owner plans to keep the first floor commercial and the rest will be converted into apartments.

The next time I go to the library I’ll see if I can find anything more personal.  Anyone interesting who might have lived there, or died there, had their heart broken there, or dreamed of living someplace else there.  That corner must have been a dreary spot for many years, and for many years the only people staying at the Keller Hotel where transient sailors, who perhaps stumbled upstairs after a night of drinking in the bar on the first floor.

It all Comes Down to the Stories We Leave

Who doesn’t love an advent calendar?