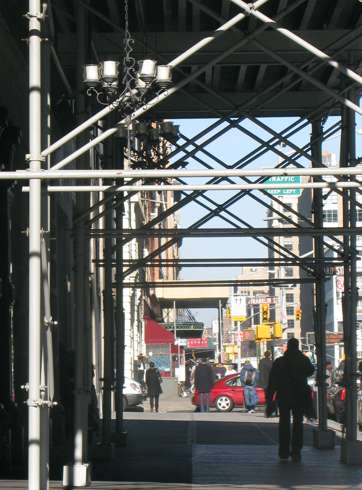 Tuesday night is choir rehearsal, Thursday night is the dress rehearsal, Friday night is a concert and Saturday afternoon is a concert.  Music heaven!  I love the music John Maclay (our director) picks. I mark my favorite parts in all the pieces with asterisks so I know where they are and I can be fully ready to savor them. I’m so glad I thought of joining a choir all those years ago.

I took this picture outside the restaurant Chanterelle, on my way down to the Municipal Archives.  I liked how they hung chandeliers out front, amidst all the construction.

At the Archives, I found the marriage certificate of my great grandparents, Peter Horn and Annie Prince.  They got married in Brooklyn on Christmas Eve in 1893.  Isn’t that sweet?  I also noticed that she lied about her age. She was three years older than her husband, but on the certificate she says they’re the same age.  I find that a lot.

I also found nothing but mystery trying to find out more about my maternal grandfather, Walter Armstrong, who was adopted. He was 15 years old when his adoptive parents were married, so he had to have been at least that old when he was adopted, presuming they didn’t adopt him before they were married.  His brother, also adopted, was 8 when they married.  I know nothing about that brother, even though he was alive until 1993 and living in Queens.  I never met him.

I found all sorts of other weirdness, but this is probably boring unless it’s your ancestors too. Families are weird.  I’m guessing there was all sorts of cheating going on, maybe a Romeo and Juliet kind of thing with either interracial or interfaith elements.  Who knows?  Unfortunately, that line of my family is one big black hole.

The Most Perfect Pop Song in All the Universe Ever

Sometimes You’ve Got to Try Anyway

2 thoughts on “This Week It’s All About the Music”