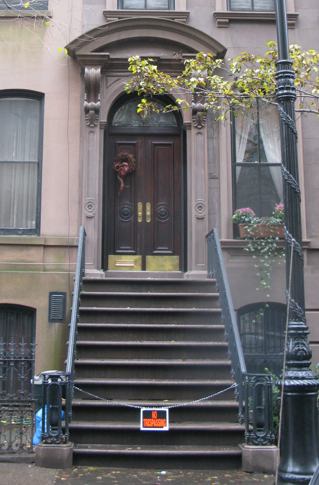 It looks like the people who live in the building that was Carrie’s apartment in Sex and The City are finally crying, Uncle!

For years now people have visited this spot, shooting pictures of themselves and their friends sitting on the steps. Tour buses full of people used to regularly line up to take pictures, except I believe the organizers officially took this spot off their tour.  Groups of girls continue to pay homage, but their numbers are smaller.

I’m amazed that the people living here were nice about as long as they have. I know the fans mean no harm, and I’m a huge fan of the show so I feel like they’re my people, but I can certainly understand how the people living might wish it would all just end.

Me, I’m excited to hear that there’s going to be another movie.  I did hear that, right?

I’ve had another “one of those days.”   But no one died, I have my health, and so do all my friends and family at the moment, as far as I know.  I still have all sorts of lunches and parties to look forward to.  My lunch today got rescheduled for next month, which actually worked out well since I had all sort of problems arise which I had to attend to.  Funny how that worked out.  Damnit.  I forgot to take pictures from my lunch yesterday.  It was a bunch of friends from graduate school along with the chair of the program. The ITP girls.  And we all looked so good, too.  No really.

A Skier on Bleecker Street