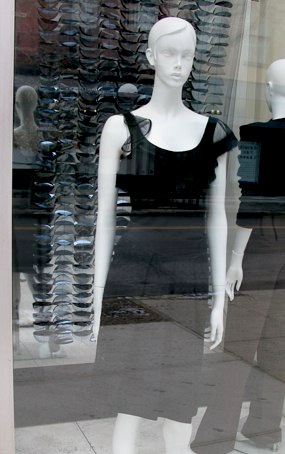 I just love the sleeves on this one! This is not actually a dress, but a top and a skirt.

When I first heard about her, I was amazed, and also had not quite a serves-her-right feeling, but I guess the fact that her luggage ended up floating down the Hudson felt like the perfect ending to her plane story. But then I thought about it and realized, she was just panicking, right?  And this is how it manifested itself.  The people who forced her away from the overhead bin and off the plane were right to do so, they could have left her.  If things had gone a little differently their help might have made the difference between life and death. They are heroes really.

But in the accounts I’ve read, everyone seems to take this weird pleasure in the fact that her luggage ended up floating down the Hudson. Like she’s a bad person, and this is fitting. I don’t know, it’s like a small pile-on, everyone’s being a little too quick to judge.  Except maybe she was blocking the aisle, and even if she was in some weird panic/denial mode, people didn’t know they would soon be rescued and everything would be okay.  They were fleeing for their lives and she was in the way unnecessarily.  Okay, their anger is understandable.  And taking a little pleasure in her lost luggage is understandable.  But why do people reporting this story join them? They should have distance.  And a tiny bit of compassion.

I Sang and Danced on Broadway Last Night!!

Pain and Misery Postponed to Wednesday

2 thoughts on “Love the Sleeves”