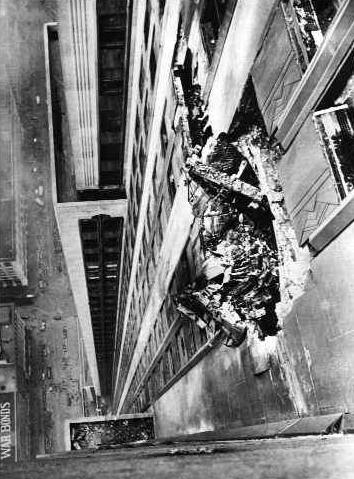 A friend sent me a link to an AM Law Daily interview  of a lawyer who was on Flight 1549, the plane that landed on the Hudson.

It goes into more detail about what it was like inside, and man oh man. Scarier than I thought, and I already thought it was scary.  It kills me how he got right back on another plane.  And he was so no-nonsense about it.

Some people are so resilient.

This is a picture of the B-25 bomber that crashed into the Empire State Building on the morning of July 28, 1945.  They got lost in the fog apparently, and went lower to where it was clear and this is the result. 14 people died. The description I read here sounds so 9/11 and so sad. The part about Joe Fountain:

“The plane exploded within the building. There were five or six seconds—I was tottering on my feet trying to keep my balance—and three-quarters of the office was instantaneously consumed in this sheet of flame. One man was standing inside the flame. I could see him. It was a co-worker, Joe Fountain. His whole body was on fire. I kept calling to him, ‘Come on, Joe; come on, Joe.’ He walked out of it.”

Oh wow.  I’m reading one of the forums on the Empire State Building website and picking up some fascinating tidbits like:

“My mother worked for the University of California at the time of the plane crash. They were on the 67th floor (I think) and under tight security as this was an R & D office for the Manhattan Project (atomic bomb). They thought they were personally under attack because of their work and were rushed out, with everyone else, by what was then the Secret Service. Everyone working in the offices had top secret clearance. She saw parts of the plane drop from above into a flower shop down below. According to what she heard at the time the plane was NOT off course but simply on a joy ride to tour manhattan when they got lost in the fog.”

God I love the internet.

Seen in the West Village, Manhattan

5 thoughts on “Hello Friday! Thanks for showing up!”