Last night I was browsing the New York Public Library’s digital image collections looking for a picture of Isidor Straus’s “summer” estate that used to be in Inwood Hill Park, in the northern most neighborhood in Manhattan.

I was recently in Inwood attending a reading by Mary Elizabeth Williams from her new book Gimmie Shelter.  (Great person!  Great book!)  Her reading made me very curious about Inwood, just the way she described it.  Plus the walk to the place where the reading was held got me all excited, I’d never seen anything like it.  In Manhattan. (More below.) 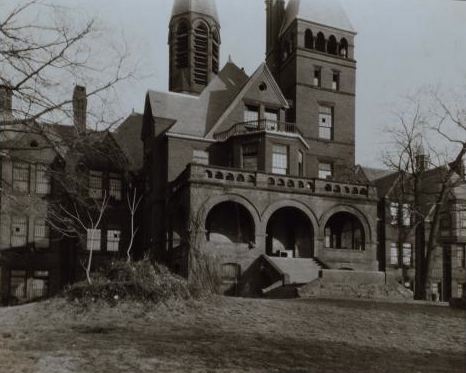 I fully plan to go back there to explore and take pictures, and then yesterday I start this new book, Cemetery Dance, and some of the action takes place in Inwood and Inwood Hill Park! There was also a small description of the ruins of the Isidor Straus mansion.  Isidor Straus was this wealthy man, owned Macy’s, but he’s probably most famous as one of the people who died on the Titanic, along with his wife Ida who refused to leave his side.  So I was looking for a picture of the long gone mansion when I came across the photograph above. It’s a 1932 shot of The Episcopal House of Mercy, aka The Inwood Home for Wayward Girls.  It looks so foreboding, doesn’t it?

I learned about the existence of “homes for wayward girls” while researching The Restless Sleep. These were places where they sent girls who were young and in trouble, but not yet prison material, and they wanted to get them on the right path.  Ideally.  It didn’t always work out that way as you can imagine.  It turns out my grandfather, who was a family court judge, wrote this bill which allowed the court to become custodians of these girls, with the parent’s permission. They meant well and plenty of times it did work out well.  Half the time it wasn’t a matter of the girls being in trouble at all, but they were pulling them out of a terrible family situation.

I’ve wanted to write about homes for wayward girls ever since.  There’s already been at least one book about them that I know of, and lots of papers and articles, but still.  I know I could do a great job with this subject.  Anyway, here’s another picture I found and loved of a house in Inwood Hill Park. It was also taken in 1932.  (More below.) 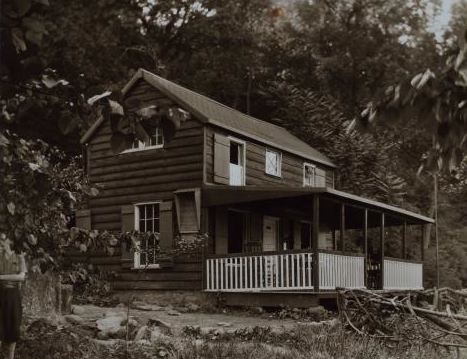 From the NYC Dept. of Parks & Recreation website description of Inwood Hill Park: “Evidence of its prehistoric roots exists as dramatic caves, valleys, and ridges left as the result of shifting glaciers. Evidence of its uninhabited state afterward remains as its forest and salt marsh (the last natural one in Manhattan), and evidence of its use by Native Americans in the 17th century continues to be discovered.”

Even better, I found this Inwood blog where this older person posted about what it was like there in 1932, when the pictures were taken. One thing they said was, “At that time, what is now known as Inwood Hill Park was called the Indian Resevation. Two Indian families still remained. There were no paved paths.”

Taking a Break From World Destruction

And Death Shall Have No Dominion