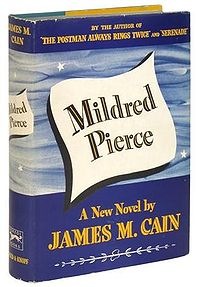 Wasn’t I just posting about the book Mildred Pierce? I just read this on TV Tattle:

Kate Winslet is TV bound
The Oscar winner is set to join the miniseries “Mildred Pierce,” which is likely to air on HBO. The original 1945 film version of “Pierce” won Joan Crawford an Oscar in the role of a bored housewives who gets involved in bad behavior.

The movie was not at all true to the book. They tried to make it this noir thing, like his other books which had been made into successful noir movies, like The Postman Always Rings Twice. In the book Mildred Pierce is not a bored housewife who gets involved in bad behavior. It’s a thousand times more interesting and subtle and complex than that.

But I’m hopeful that whoever wrote that is simply describing the previous film, and this does not at all reflect what the new production team will do with this new miniseries.

It’s Going to Rain? Why Wasn’t I Informed??

The Beginning of the end of high heels?