I don’t know about today. I’m going to the commissioning ceremony this morning aboard the USS New York, the ship made from WTC steel. I’m looking forward to that, but at the same time I anticipate feeling liking an alien there.

This is not at all a judgement of anyone else, but here’s the story I tell of where I’m coming from. I volunteered down at St. Paul’s Chapel during the recovery period. Whenever the word went out that we needed anything for the workers, by the next day the chapel would be filled to the rafters with whatever we needed. For instance, the workers boots kept melting because the fires burned below the wreckage for months. We said we needed boots, and I don’t even know how the word got out, but the next day we were buried in boots. From all over the country. So we were always getting stuff.

One day we got boxes and boxes from Japan. I was working at the chapel that day and going through the deliveries, deciding what would go where. I opened the boxes from Japan and they were filled with tiny, paper origami cranes. I didn’t know what they meant then, but I do now. They are a symbol of peace and also a gift that is meant to grant good luck, health and recovery. They were also made famous by Sadako Sasaki, a little girl who lived near Hiroshima and died as a result of the bombing. She folded paper cranes, trying to save her own life, but she died after making 644.

Inside all the boxes of cranes where cards from the people of Nagasaki to the people of New York, expressing sympathy and hope for our healing and recovery. I started crying. That was my first and only time crying down there. What happened was wrong, and continued action like that must be stopped (in some way) but I don’t have to hold hate and anger in my heart. If the people of Nagasaki could do it, I could do it. Again, not judging anyone who approaches what happened differently. Everyone heals in their own way.

And thank you people of Nagasaki. Your gift made all the difference in the world to me.

But that is why I anticipate feeling l like an alien on that ship today.

Another roof shot. I should have some great pictures later, though. 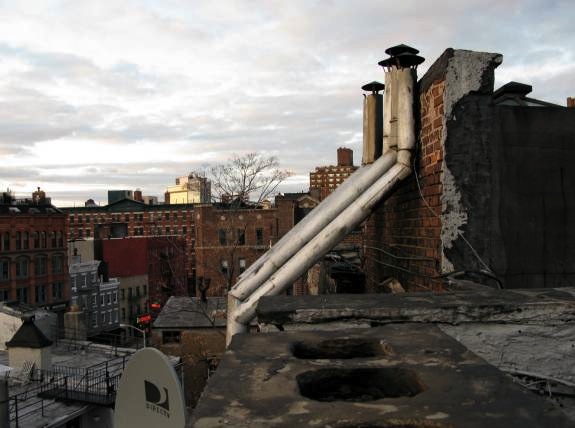 What I Did During the Heat Wave