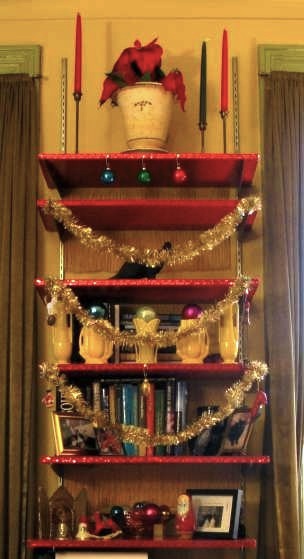 For whatever reason I was feeling so overwhelmed by the idea of decorating. I solved it by just dressing up one area. In one small corner in my apartment it’s festive.

Everywhere else it’s bah humbug and “every idiot who goes about with ‘Merry Christmas’ on his lips, should be boiled with his own pudding, and buried with a stake of holly through his heart.”

Not really. So hallelujah! Which I swear to god is playing right now.

I just skipped ahead to the Snoopy Christmas song, though.

The Grace Church Choral Society concerts are this week. This whole week is singing heaven for those of us in the choir. The best part has to be the dress rehearsal with the orchestra. Singing with the orchestra is so exciting and since there’s no audience we’re all singing and playing for ourselves and each other and it’s both relaxed and thrilling at the same time.

But pray for the tenors and basses. From Wikpedia about The Chicester Psalms, one of the pieces we’re doing:

“The Psalms and the first movement in particular are noted among performers for their musical difficulty, with the opening section of the first movement often considered one of the hardest passages for choral tenors ever written, owing to the range of the piece, its rhythmic complexity and the consistent presence of the strange and difficult-to-maintain interval of a major 7th between the tenor and bass.”

Okay, I should get ready.

And do some work.

I am Never Watching Another Debate as Long as I Live