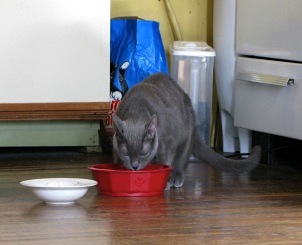 For the first time in two months, Buddy has actually gained weight! He weighs 14 and a half pounds. At his last two monthly visits he weighed 13 pounds. “He does look really boney,” the vet said, I think to make me feel better about being so wrong about his weight.

Bottomline, the vet was not alarmed about the diarrhea that’s been lasting so long. He gave me a new medication called metronidazole that tasted so bad Buddy was running around the apartment foaming at the mouth. There’s a pharmacist nearby who flavors cat medications to taste like tuna, so I’m going to take it to them. The vet also encouraged me to continue the transition to raw food. So I feel better. I’ve got things to do to address the problem.

Can’t Move, Cat on Me