I’ve been seeing Harry on the street for decades, but I never knew who he was. He carried himself like he was the West Village though. At some point he had to use a wheelchair to get around, but he still did it with attitude. Not long ago I was walking by a church on Christopher and I was sad to see that he had died. At least now I know who he was. It’s kinda hard to tell, but this is his wheelchair covered in flowers. Obit below. 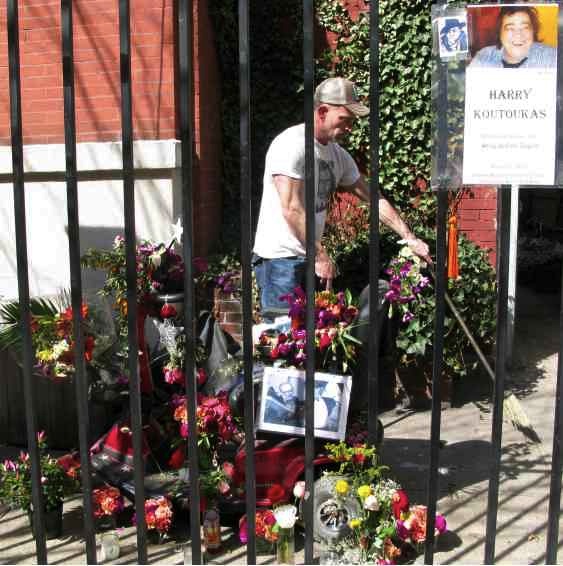 “H. M. Koutoukas, a prolific Obie Award-winning playwright who was a leading figure in Off-Off-Broadway theater in the 1960s, has died due to complications of diabetes, according to a report in The New York Times. He was 72.

“Koutoukas, known as Harry, wrote, by his own count, over 200 surreal and absurd plays that he called “camps.” Along with Lanford Wilson, Doric Wilson, Tom Eyen and Robert Patrick, Koutoukas was one of the playwrights who helped establish Caffe Cino and its reputation as Off-Off-Broadway’s founding theater.

“Among his plays are Medea in the Laundromat and Awful People Are Coming Over So We Must Be Pretending to Be Hard at Work and Hope They Will Go Away, as well as The Last Triangle, one of two pieces that marked his debut in 1968. In this latter play, Virginia Wolfgang, Noel Cowel and Lottie Lemming attempt to live graciously after a nuclear holocaust has eliminated the rest of the human race.

“In addition to writing, directing, and staging his own work, Koutoukas performed in many productions presented by Charles Ludlam’s Ridiculous Theatrical Company.
He is survived by a sister, Jean Ann Davidson, of Endwell, N.Y.”