I’ve been reading some of the commentary about Ricky Gervais and the backlash from the presenters that started almost immediately at the Golden Globes last night (Robert Downey Jr, Tom Hanks and Tim Allen, etc.).

Gervais did conduct the whole thing like a Hollywood roast and a few times I too said, “whoa,” although I laughed more.  But I was made a thousand times more uncomfortable by the public critique from the presenters.  When Steve Carrell refused to hug it out, it was a horrible moment. (I was also confused, like are they doing a bit? I hope they were doing a bit.) The comments from Hanks and others had the appearance of being at least partly political, and even if they were also sticking up for their fellow actors, I wish they had handled it another way. Like, “Hey, maybe this is crass, and maybe this wasn’t the best way to go with this, but this is what he does and I hope you’re not taking this seriously Hollywood Foreign Press (and Cher and Angelina Jolie), but if you are we’re sorry and hey Ricky, we love you too, but tone it down dude.”

I just didn’t like the school-marmish, sanctimonious way some of them piled on. They were more off-putting in the end, for me. Oh, and Downey criticizes Gervais and then launches into the most awkward, weird, protracted bit about sleeping with all the female nominees for the category award he was presenting. Gervais was funnier.

Anyway. This shot is looking up Minetta Lane.  There used to be a Minetta Brook which was submerged in the 1800’s, but I have this vague memory of being told that it still flowed up into a fountain in a building on this street (or maybe it was on Minetta Street).  Now I’m thinking that story probably isn’t true.  This guy who seems to know a lot about waterways, researched it and his findings seem to be inconclusive. 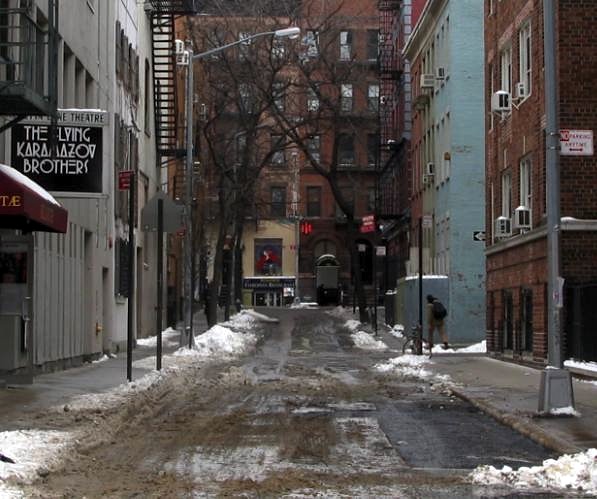 Yesterday Was No Fun for Me