No, I don’t know why I’m watching the Bachelor Pad. I’m not quite wallowing in self-loathing enough? Except there’s a happy ending.

But first, that horrible scene with Jake asking Kasey and Vienna for help. Jake is a former loathsome bachelor (loath is the theme today) who proposed and later broke up with Vienna, who I originally didn’t think was loathsome. There was a televised post break-up interview with the two of them and Jake came off like a total pompous, sexist ass jerk and Vienna came off as not very bright and unattractively child-like, but she had my sympathy. Vienna is now with Kasey, a former contestant on The Bachelorette. Kasey was the most embarrassingly clueless person in Bachelor history, it would take too long to explain, but his idea of romance is stuck in the toddler phase. No, maybe grammar school, after you’ve watched a little more tv and have this fantasy idea of life and women and relationships, but you haven’t kissed a girl yet.

Jake is not doing well on the Bachelor Pad, no one likes him, and so he went to Kasey and Vienna for help. I don’t like Jake, (or Kasey or Vienna) but Kasey and Vienna not only said no it was literally like watching children on the playground. They reveled in saying no as only angry little children would, calling out “No one likes you,” after Jake accepted their answer and left. No grace or dignity. All that was missing was the “nyah-nyah, nyah-nyah-nyah.”

The whole show was like that. They pulled stunts like lining everyone up and then asking them to throw eggs filled with paint at the person they were the least attracted to. It was emotionally painful and the eggs hitting your back hurt as well. I kept hoping for someone to say, “What are you kidding me? NO.” It was a tv version of the Milgram experiments. Everyone just did what Chris Harrison told them to do. I could go on, every moment was lower than the next, but I want to skip to the end, when Jackie was voted off.

Jackie and Ames are a couple. I love Ames. Ames shouldn’t be on this show. Why is he on this show? He is such a thoroughly decent human being. The truth is, there must be something wrong with him if he’s on this show, but I’m certain it’s not something loathsome. Jackie was voted off, and Ames was walking back after saying goodbye to her. He had this sweet look on his face and it was like watching a kitten walk back into a pit of hungry vipers and spiders, when suddenly he smiled, waved at everyone and ran back to the limo and jumped in and left the show with Jackie.

I watched it twice. A genuinely nice moment after all that ugliness. It’s like people like Kasey and Vienna are not even members of the same species. Good for you Ames.

This bird was making a lot of wonderful noise in the window the other day. 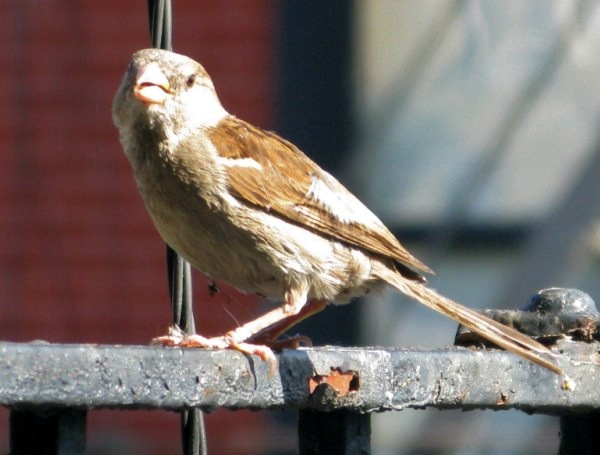 Help! What was that song at the end of Numb3rs?