Six more days until the new season!! There have been a couple of compilation-type specials on BBC America and I was reminded of how much I loved the Van Gogh episode last year. So much heart.

If you’ve never watched Dr. Who before, start with the Eleventh and most recent Doctor, Series 5, which began in 2010. It’s not a lot to catch up on and the investment of time will be a pleasure. This really is a wonderful show, it’s not what you think. I thought it was just some dated, cheesy scifi thing. But it’s this magnificent mish-mosh of heart, humor, intelligence—every show is a great, great ride. And I absolutely adore each character. I was slowest to warm up to Rory, but now if anything happened to him I would swim across the Atlantic, kidnap Steven Moffat with a fake gun, (they don’t know the difference over there, right?) swim back, park him next to the litterbox, feed him boring food, give him a bad case of poison ivy, and make him listen to chipmunks singing Bach’s B Minor Mass until he brought Rory back.

This wedding party (it looked like a wedding party) was walking down Fifth Avenue towards Washington Square Park, taking up the whole street. When the cars behind them honked they held up a bunch of bouquets and took their time getting out of the way. I thought it was rude and self-centered actually and I was on the cars’ side. They made a nice picture and I was happy for their happy day, but still. 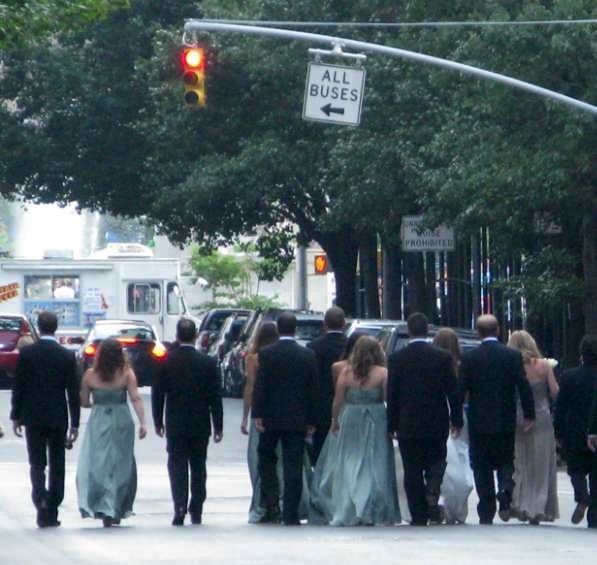 Thank you!! And the Soundtrack for Heaven

A Window I Liked