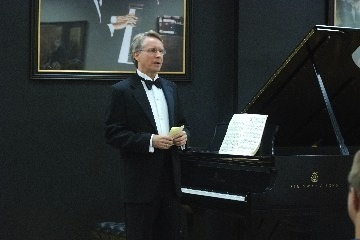 This is my brother Douglas at the Rachmaninoff benefit. It was his daughter Ellie who got the whole thing started.

I want that piano. It’s a Steinway concert grand, model d. I don’t know a lot about pianos actually, I’m told this is the top of the line, so hence I want one. It looks like they cost around $150,000 used so yeah. I’ll take the Baldwin upright.

I sat down at this piano, but I haven’t played for decades and you can’t just sit down and play after that much time. I simply admired.

I think I’m tired, tired, tired, because I’ve been stressing so much about the implant process which was supposed to start today. One of my dentists emailed some answers to my questions, but his answer was inexplicable. He started talking about how I’d be also wearing two temporary bridges in the meantime and this is the first I’ve heard of it.

Yeah. I want to eat a bird. What else is new?