Except for West Side Story. I’m still warming up to Leonard Bernstein’s Missa Brevis, which a member of my choir, Brent, said was originally written for a play about Joan of Arc. I meant to remember that and see how I felt to sing it knowing that, but of course the minute we started singing it my over-riding thought was, “This is hard.”

I saw some tweets about a truck full of bees that over-turned in Utah, but I can’t find any pictures. I understand that people were getting stung, but come on. There’s no one nearby with a camera out there?? Which reminds me, I have a couple of YouTube videos I wanted to post.

A lovely film from Occupy Wall Street of muslims using the people’s mic in a nice way.

For Bones fans, outtakes [the video I linked to has since been removed].

This is one of my books (The Restless Sleep) at a library in the East Village, (the Ottendorfer, at 2nd Avenue and St. Mark’s). Thank you, New York Public Library and Ottendorfer librarians! 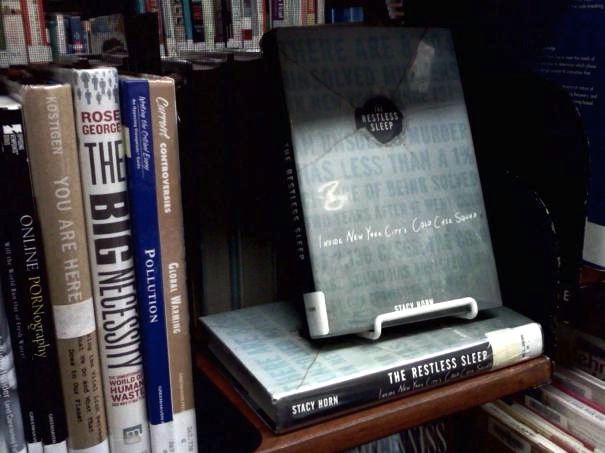