A Penn State graduate assistant named Mike McQueary witnessed an assistant football coach named Jerry Sandusky rape a boy in the locker room shower in 2002. McQueary told his father who told him to tell Paterno, who then told athletic director Timothy Curley and the senior vice president of finance Gary Schultz. All Curley and Schultz did was tell Sandusky, “who mentored children through a charity program, not to bring children into the football building.” (From Gothamist.)

“Despite a powerful eyewitness statement about the sexual assault of a child,” the Pennsylvania Attorney General said, “this incident was not reported to any law enforcement or child protective agency, as required by Pennsylvania law. Additionally, there is no indication that anyone from the university ever attempted to learn the identity of the child who was sexually assaulted on their campus or made any follow-up effort to obtain more information from the person who witnessed the attack first-hand.”

It is beyond comprehension. A total of nine boys have come forward to say they’d been sexually assaulted by Sandusky. So Sandusky has been charged, as well as Curley and Schultz who were charged with perjury and failure to report, and the president of the university stepped down. And now Paterno has been fired.

The rioters and other protestors and supporters are saying Paterno has been scapegoated. They might have a case if he was the only one charged, but he’s not and even if he was, he’s still guilty of not calling the police. A child was raped. And his response was to tell the school athletic director and vp of finance? And when he saw that nothing was done, he just left it at that? You can continue to love and support someone while also acknowledging that they did not do the right thing. All three of them are guilty and all three are suffering the consequences. With all the wrongs in the world, and there are so many terrible things happening all the time everywhere, this is what you riot about? Come on. Pull yourselves together. Reach out to the families of those children (now adults probably) and show them some support. Do some volunteer work somewhere.

I have mixed feelings about McQueary. I wish he had done more, and deep in his heart he must also wish he had done more. But he was young, and intimidated to a certain extent—I think the Milgram experiments explain his lack of response. Which brings me to another guilty party here: McQueary’s father. His father was the first adult who didn’t call the police. He utterly failed his son in that moment, and set a terrible example. I just can’t judge McQueary as harshly. Update: I’ve since learned McQueary was 28 at the time, and the boy he saw being raped was 10. I no longer cut McQueary any slack.

This is the picture from the our 2011 holiday concert program. Among other things, we’re singing Randall Thompson’s Peaceable Kingdom, which I thought was appropriate given the subject above. 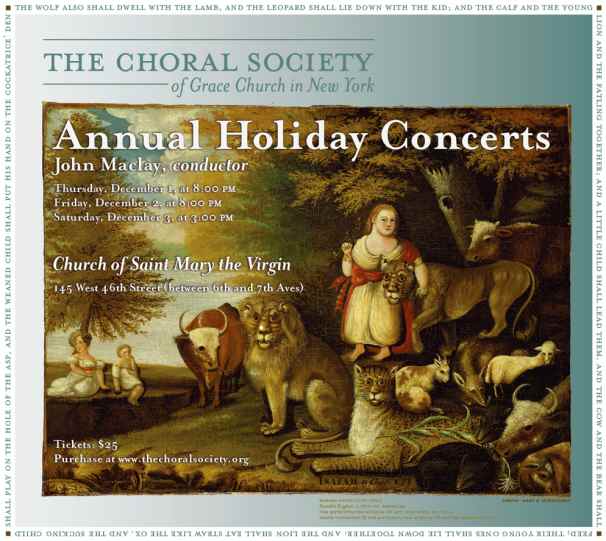 Cool Links People Have Sent Me

8 thoughts on “What the hell, Penn State?”