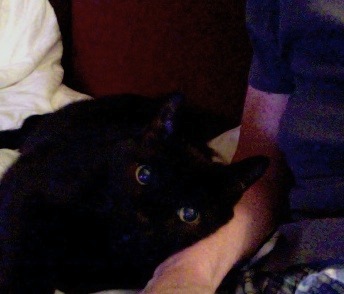 I already tweeted this picture last night, but here it is again. This was Finney curled up against me while I watched Homeland on my computer. Actually, that’s not such a great shot is it? It’s too dark. Plus my arm looks deformed.

Oh well. I’m heading back to the couch as soon as I get caught up in my email. I went out swimming and did a laundry and now I’m exhausted. Must be the cold, which is such a minor cold.

I want to rant about all the hating on Madonna. I remember when she first came on the scene. There was no one like her at the time. It was such a different world back then. I was in awe of the power-assuming, ball busting, fuck-you, bomb-going-off excitement of her. Loved all the different early looks, the videos, her dancing. I envied so many things about her, as her career just took off and I struggled along on my mousy way. She ruled MTV and the club scene for a while. It was fun.

She does seem to have this mean girl side to her that made it hard for me to love her, but I’ve always admired her. And loved some of her music.

Anyway, good for her that she’s still around. She looks fucking great for 53. I think she needs more of a re-invention, but I’m nit picking.