I saw Bruce Springsteen at the Meadowlands last night thanks to my friend Steven Levy. Excuse me, my BEST friend Steven Levy. What a show. I’ve never seen Springsteen in concert before, I’m struggling to explain my reactions. The music was amazing, but I was just so impressed by Springsteen’s poise on stage. In the face of this massive, massive crowd he managed to project calm, affection, endless graciousness.

This might be old hat to people who have seen him in concert before, and it’s not like I’ve never witnessed someone knew how to work a stage and a crowd, but Bruce Springsteen is pretty much at the top of the heap. The only only person I’ve ever seen to compare to him would be Mick Jagger, except Jagger is a whole other thing, of course. Also, when Jagger is on the stage it’s all about him, and even though it was all about Bruce last night too, he managed to make it feel like it was all about everyone else and he was just as glad to be there having fun with what was happening, too. There was a great moment when he brought two little girls on stage and gave them the mic. It was clearly planned, but it was still sweet.

Plus, he’s a great live singer. Amazing command. And I liked the anger and disappointment expressed in some of the songs, something I can’t help feeling at this stage in life. There’s some pretty screwed up things going on out there.

Anyway, thank you Steven!! I had a marvelous time! 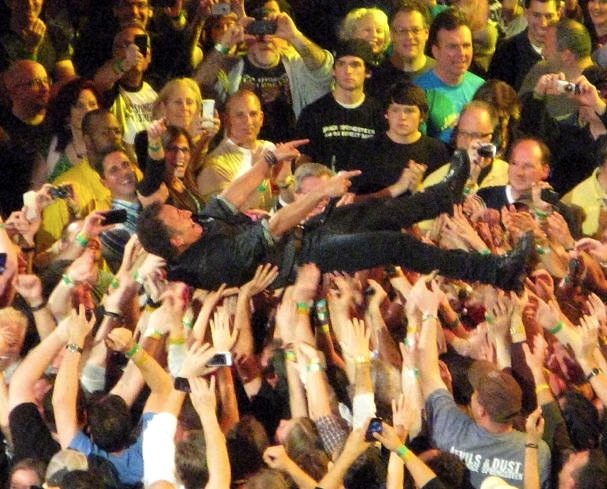 Big Excitement Across the Street