The other day someone said something he knew wasn’t true about President Obama. I knew it, I know he knew it, and yet he said it. (IE, the claim that it’s Obama and not the republicans who support ending Medicare.) Paul Krugman wrote an op-ed about this.

Not long ago, Rick Santorum got angry when a New York Times reporter did something similar when asking Santorum a question about a speech Santorum had just made. Santorum had said Romney was the worst republican in the country to go up against Obama on the health case issue. He phrased it in an awkward manner, but it was clear what he meant. But the reporter asked him about saying Romney was the worst republican in the country, period. The thing is, the reporter was doing what Santorum does probably a dozen times every hour, and a mild version of it.

Santorum and others don’t just routinely mischaracterize Obama or spin his words in a direction they know isn’t true, they make things up and encourage people to believe outrageous things about him. When did we come to this? People care more about winning than the good of the country. I mean if they had real issues with what Obama was doing they would refer to the things he is actually doing and not resort to making stuff up.

You could argue that both sides do it, but nothing to the extent that one side is guilty of.

This is looking towards the World Trade Center site from the burial ground of St. Paul’s Chapel. 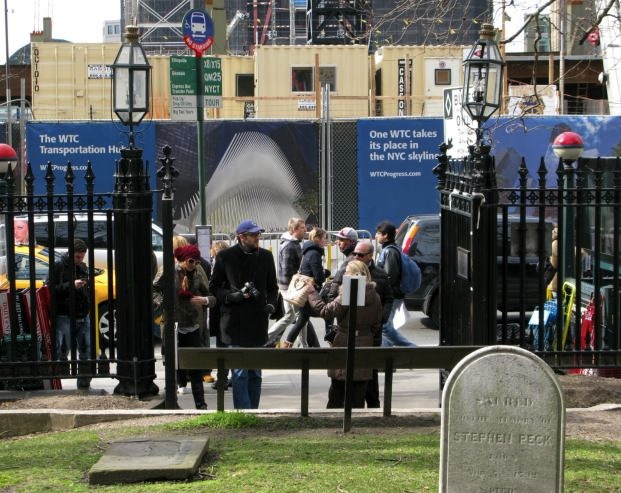 The Jeff Conway Story is Freaking Me Out

2 thoughts on “Truth and Integrity”