I made a Spotify playlist of the music I write about in Imperfect Harmony and it looks like my publisher has solved my technical difficulties. If you go to this new link the music should be playable now. I also put together this page with links to YouTube videos of the same pieces.

A German Requiem
Written by Johannes Brahms from 1865-1868

The Chichester Psalms
Written by Leonard Bernstein in 1965

Messiah (The Lift Up Your Heads chorus.)
Written by George Frideric Handel in 1741

Toward the Unknown Region
Written by Ralph Vaughan Williams in 1906

Mass No. 11 in D Minor, aka Missa in Angustiis
Written by Joseph Haydn in 1798

Missa Simile Est Regnum Coelorum, the Agnus Dei II
Published by Tomás Luis de Victoria in 1576
I really love this one (which you can tell when you read the book).

Memoranda
Written by Dylan Chan in 2005

Let us Cheer the Weary Traveler
Written by R. Nathaniel Dett in 1926

The Peaceable Kingdom, the Ye Shall Have a Song chorus
Written by Randall Thompson in 1936

Requiem, Dies Irae section, Lacrimosa chorus
Written by Giuseppe Verdi in 1873
This version of the Requiem was conducted by Herbert von Karajan, who makes a brief appearance in my book. He’s absolutely mesmerizing to watch. To see him go nuts, click here. He’s conducting another section from the Verdi Requiem. (I love this requiem. Okay, I love all requiems.)

A picture I took at the end of one of our concerts. I’m giving myself symbolic applause for putting this page together. 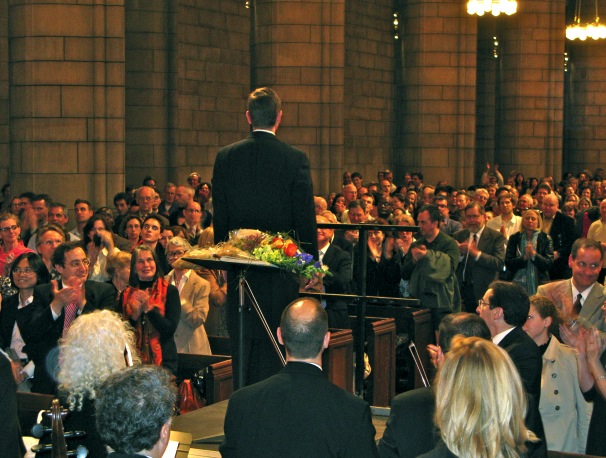 It’s Still a Holiday, Isn’t It?

A New York Kinda of Night

4 thoughts on “The Music from Imperfect Harmony”