I’d planned to talk about religion and science. I have a million examples (endless really) of religion refusing to accept evidence right in front of their face (evolution, global warming) but fewer or science, although they certainly exist. And I wanted to talk about the Temple Foundation again, an organization that says it seeks to bring the two sides together (religion and science).

But then I woke up and Buddy had stopped eating again, and that was that for my day. He’s scheduled for an ultra-sound on Monday. Meanwhile, I gave him sub-q fluids, some Pepcid, and he just ate a little so I feel up to a brief post. To explain my absence, basically.

On my way to pick up a variety of foods to get Buddy to eat, I stopped at a church to interview a guy who works there who had rescued a pigeon who was caught in a tree in front of the church. I asked him if he felt like a hero, thinking he wouldn’t admit to something like that, but he said, “Yeah. I did.” To help a creature who is in trouble feels good, no doubt about it.

Pigeons in a city fountain. 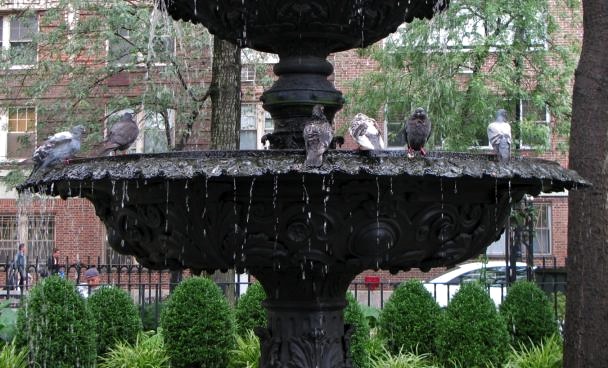 The Sex and the City House is Not for Sale

I’m Going to be on Science Friday Today

11 thoughts on “Anxious and Worrying”