We had choir rehearsal last night so I only saw the last half of the second presidential debate. I came in when Obama was discussing coal and oil and effectively refuting everything Romney had said. I caught Romney talking about “binders full of women,” suggesting marriage as the best response to assault rifles, and that being able to leave work at five to feed your family was the most pressing work issue for women, completely flubbing immigration, and, of course, the Libya moment, the best part of which was when Obama rounded on him in indignation and said, “And the suggestion that anybody in my team, whether the secretary of state, our U.N. ambassador, anybody on my team would play politics or mislead when we’ve lost four of our own, Governor, is offensive. That’s not what we do. That’s not what I do as president. That’s not what I do as commander in chief.”

It was a balm to my worried heart. That said, I want to repeat what I’ve posted many time: I hate debates. Always have. I’m glad Obama won, but I’d vastly prefer to abandon the practice of presidential debates altogether. It’s too much of a warrior thing, which is not entertaining or informative. I don’t want to watch a battle. And I reject that this tells us anything about a candidate’s ability as a president (or how they would do in a real battle).

I have a better idea. Give each candidate a half hour (or more) to lecture. Sorry, I love a good lecture. I’d like to see Obama speak about constitutional law. What would the Romney equivalent be? Wall Street investments? This would give each of them an opportunity to shine in areas they are knowledgeable about and I’d get to learn something.

There’s be all sort of rules, just as there are in a debate. Leave the other guy out of it. No discussion of your opponent whatsoever. This is your opportunity to show the public what you know and also to educate the public on something you think is important. The subjects of the lectures are not released beforehand. This would be to prevent the other candidate from working in references to the subject in their lecture.

I’d have to give this more thought to come up with the most useful guidelines.

I’m going to take a bunch of pictures of Bleeck. Someone I know who also lost their cat and got a kitten has been shooting up a storm. I don’t have many early shots of Buddy and Finney and I want to make sure that doesn’t happen with Bleeck. 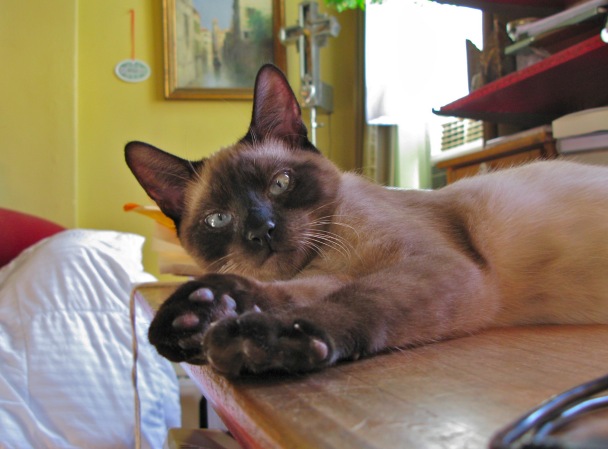 There are No Movies I’m Dying to See

My First iMovie – The American Museum of Natural History

7 thoughts on “I have an idea for something to replace debates!”