It’s hopeless. Part of the problem is, Bleeck loves to do this full-body-glom-on-Finney thing. He leaps onto Finney’s back, wraps his legs around Finn’s belly, and will not let go. He looks like a bizarro kitten-cape. An evil kitten-cape, because he’s biting Finn’s neck the whole time. I’m sure he isn’t hurting him, or at least not terribly. He does a similar thing to my arms and legs. The funniest thing is he purrs the entire time he’s doing it. I’m so happy, chew, chew, chew, this is the best, purr, purr, purr, mwah-ha-ha.

So when I walk into the bedroom I think Finney’s expression means, “Save me.” 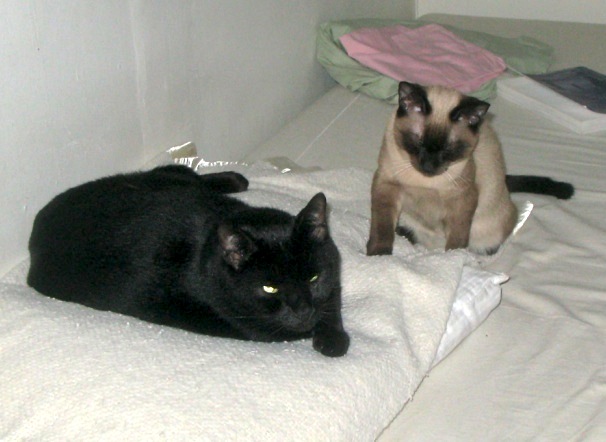 Feeding time. Bleeck has to have all the food, of course. I should separate them, but Finney eats a few bites at a time, rests, eats some more. I’d have to separate them for a long time which would make both cats miserable. Each cat quickly gets bored with whichever room they’re in and they like to roam.

This is me attempting a mini-separation. Bleeck’s food was in the kitchen, and Finney’s food was on the … couch? Good lord, what was I thinking? 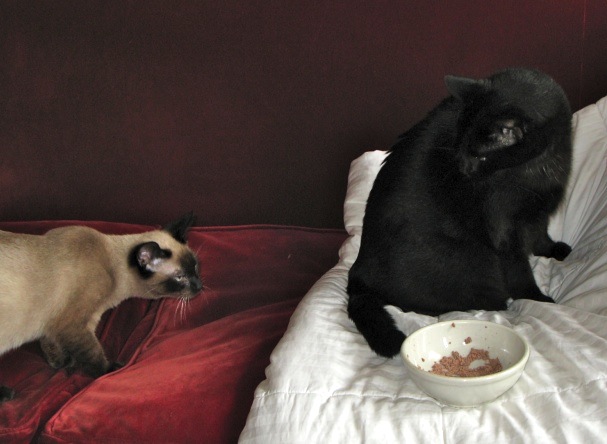 8 thoughts on “Finney and Bleecker Updates”