Years ago I saw a story on the news about all the ashes left unclaimed in funeral homes. It’s not unusual, it turns out, for people to leave behind the cremated remains of their relatives, which have been slowly accumulating in funeral home closets all across the country. I went out to the Bay Shore Funeral Home on Long Island to learn more about this, and they showed me their own closet-full of abandoned remains. The older remains were stored in small tin cans that looked like something you’d find in a grocery store, the newer ones were kept in plastic.

I was allowed to go through some of their older log books from the 1930s and 1940s. Once again it shows how lists can sometimes make for very compelling reading. I included some of the entries in my book, Waiting For My Cats to Die:

Handyman, aged 43, cause of death: general paralysis of the insane. No spouse or children. Mother unknown. Cost of funeral: $259.

Housekeeper, aged 71, cause of death: exposure. She was found on the corner of 3rd Avenue and Cherry Street. Irish, widow, cost of funeral: $75.

Female torso, white, aged unknown, cause of death: unknown. [The newspaper said it was found on the ocean side at Camp Cheerful.] Cost of funeral: $30.

Eight people from the Hattie family died in one six-year period.

Housekeeper, negro, aged 34, and stillborn infant, cause of death: toxemia of pregnancy, contributory causes: dead fetus. [This was her seventh child.] They were both buried in the town plot. Cost of funeral: $75.

Laborer, World War I veteran, aged 42. In the death notice it says “heart attack,” in the funeral home records it says “syphilis.” The Veterans Bureau paid for him to be buried in the “colored section.” Cost of funeral: $100.

Clerk, aged 19, cause of death: gas poisoning, suicide. [An attached newspaper article says that although he had been in good spirits lately, he had been depressed about a heart condition he was left with as a result of rhematic fever from two years before. He was popular in high school where he graduated the previous June. He killed himself in September.] No cost is listed for his funeral.

Laborer, aged 40, cause of death: skull fracture caused by a train at the 3rd Avenue crossing. [The watchman yelled a warning, the newspaper account read, but he walked directly into the path of the train anyway.] Cost of funeral: $345.

Infant, aged 1 year, 10 months, cause of death: drowned in the Great South Bay by her mother who was found insane and committed to Pilgrim State Hospital. [Her husband said she was in a highly nervous state because the child had been born prematurely, the newspaper reads. She dressed herself and the baby in bathing suits, waded out waist deep and later told her husband that she lost the child. At her arraignment she asked three questions: Could she go home with her mother, what is the penalty for 1st degree murder, and could she see her baby.] Cost of funeral: $204.19.

Laborer, aged 29, cause of death: drowned while dumping snow from his highway truck into the Great South Bay. Cost of funeral: $360.

Infant girl, cause of death: monstrosity. Cost of funeral: $15.

So yeah, very morbid. I read every entry in the log books. It has to do with my obsession with the forgotten. It pains me to think of all the log books in every funeral home in America packed with entries about people no one thinks about or remembers anymore, and all the remains gathering dusts on shelves (although the funeral homes are allowed to dispose of them after a certain period). On a happier note, and maybe this transition will be a little too jarring, but here is a Christmas store window along Bleecker Street. I’m not entirely sure what those things stuck to the window are supposed to represent. Really big raindrops? I just loved how it looked. 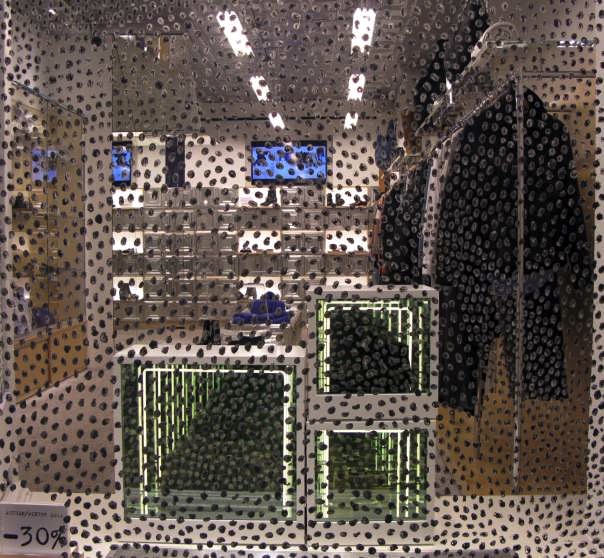 Dogs Who Walked Past Me Today

3 thoughts on “Just How Morbid Am I?”