Nothing serious! But I woke up and Echo’s web server was down. Echo is the social network I run, and we also have a web server, which hosts this blog, among other things. When I called our host to fix it they brought both our machines down! The web server is now back up, but I’m in state, waiting for the machine that hosts the social network part to come back up.

Aaaaaaaand I just burned my breakfast/lunch. Terrific. This is not an apartment with a lot of back-up food. I’ll update later.

Update: Echo is completely back up, burnt food eaten.

I took this on my way to the best Christmas Eve party EVER. It snowed while I walked, and then turned to rain by the time I got there. But I was strolling in the snowfall for a few minutes!! It was great. 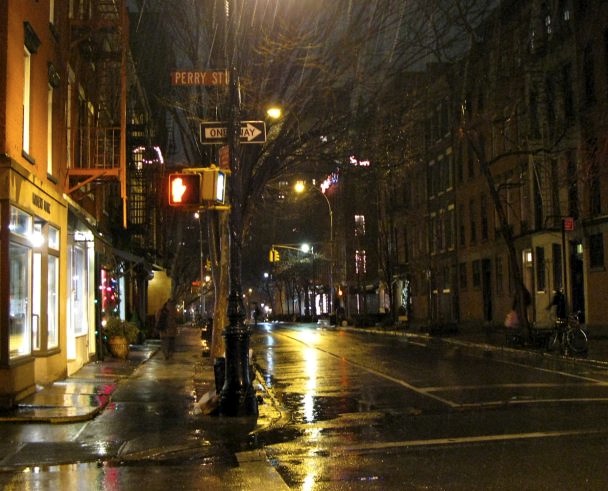 The musicians and some of the singers. I wasn’t kidding when I said this was a great party. It was such a wonderful group of people, every one of them open and friendly and interesting, and it was in an apartment that had that old New York feel which is almost entirely gone. I was so happy. The hosts were two sisters who lived in my building about twenty years ago and I ran into one of them on my roof last 4th of July. They’ve known my next door neighbors since they were children, so she was there to watch the fireworks.

The guy in the plaid lives in Vermont but he’s been coming down to Jane Street near me for the past 24 years to sell Christmas trees. That’s his son on the bass. Ohmygod, I just realized, the Christmas trees I posted the picture of other day were his! Here he is, on the far left!! Isn’t that funny? You take a picture of some random guy, and a couple of days later you’re sitting next to him, singing. 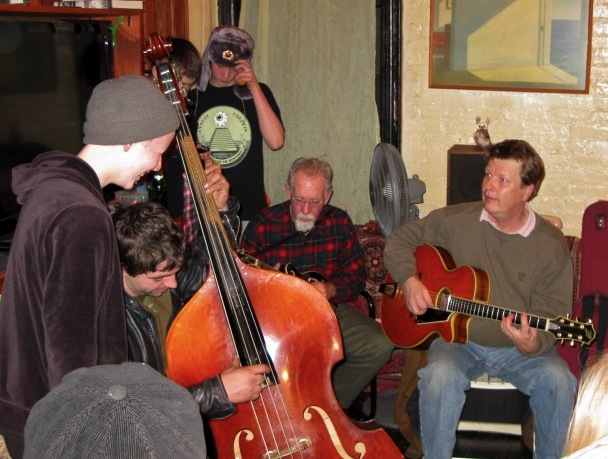