I just watched the Homeland season finale, read a bunch of reviews, and here’s what I think.

What I liked: when Quinn refused to kill Brody and made sure no one else did, and all of his reasons for doing so. Such compassion and integrity. (Oh God, do I now have a crush on a trained assassin?) What I didn’t like: when all is said and done, I don’t like Brody and I’m with Saul, Carrie is the smartest and dumbest person ever. While I agree with Quinn, who hasn’t made a bad romantic choice, this is rather extreme.

That said, one of the more interesting things about Homeland is how Brody was portrayed. As many others have already pointed it, Brody is a bad guy but it isn’t all black and white. I personally think he’s definitely more bad guy (killing one of his military buddies, and then killing the Vice President with such intimate passion) but the point is the show didn’t make him a cartoon terrorist. For me the finale is a success because it sets us up to go deeply into the gray areas they have already established with this character.

If Brody really didn’t participate in that bombing, through the process of Carrie clearing his name, the show must now fully explore all those gray areas of his character and our war on terrorism. First, she must show how he became what he became. Yes, he was weakened by years of captivity and manipulated, and he’s shown weakness of character that must have been there all along, but how did we help make him the man he became? Then they must answer the question: is there any chance for redemption for Brody, beyond killing his character, which is the customary end for characters who have done something usually considered irredeemable, but are shown to be not all bad or truly remorseful. And since it would also be about redemption for us too really, the answer to that question is even more difficult and complicated.

The problem is, either Carrie is going to tell Saul what she did or he will figure it out and now Carrie is an enemy of the state, and I don’t see how that complication is going to add anything. It would be SO interesting to watch how anyone who doesn’t see the world in black and white is as demonized as the cartoon bad guys (if that is, in fact, what’s going to happen next season). To see her struggle to make a culture that is dead set against seeing the gray areas to see those gray areas would be so exciting! But if the CIA believes they have a reason for demonizing her—she aided a terrorist—it becomes a less subtle, less interesting battle for her and for me as a viewer. It would be much more compelling to watch them demonize her for being smart and having vision and then have her turn that around (hopefully), rather than for making such spectacularly bad choices in the name of love that they view her as a terrorist/accomplice. For that reason, I wish they had let Brody get away in some other way. I wish they had Carrie believe him and not kill him and just let him run out on his own.

Now she has to also prove her innocence. Maybe Quinn will be the first to come to believe her. But in the beginning, he’s going to feel responsible for all those deaths, which is going to be awful. After seeing him be so heroic, I don’t want to see him suffer! For that reason, maybe he will come after her harder than anyone else at first.

Also, Carrie doesn’t know Brody killed his friend, or killed the Vice President with such apparent conviction that this was okay. Maybe Brody had to convince himself that the Vice President was that evil it was in order to do it, (and he was no prize) but Brody is still more bad guy than good guy, which Carrie must eventually see. What then? Oh wow, I meant this to be a lot shorter review and I have to go now! I will probably have to edit this later.

Later: I wanted to add that I agree with people who say Brody is not in love with Carrie. His expressions of love are never convincing. And what was that about looking sad when she said she chose him? The writers specifically wrote in the mixed signals so it has to mean something.

My brother put Christmas lights on one of the trees uprooted by Hurricane Sandy. I wish my night shot had come out better but it didn’t. 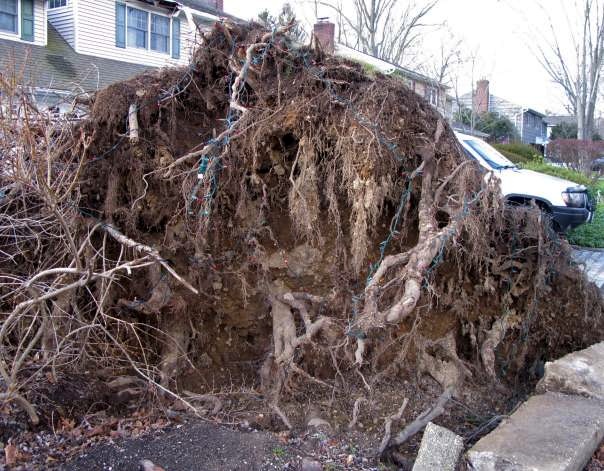 I Hope the Crashed Tardis on Perry Street Will be Back!