Author Dennis Lehane’s dog recently went missing and he’s been doing everything he can to find her, like posting on Facebook and offering a role in his new book to the person who locates her. Someone posted the following comment on NPR in response to the story:

“There are currently over 2600 missing children in the US, according to the National Center for Missing and Exploited Children. Perhaps this author could use his clout to help search for one of them rather than his dog, notwithstanding how beloved it may be.”

First, we don’t know all the things Dennis Lehane has done in his life to help others, but that isn’t the point. There is always something more important we could be doing with our time and money, and its just so unfair and unkind to guilt someone addressing a personal crisis like this, famous or otherwise (because it’s not just the famous who are subject to comments of this sort).

People who are doing something for animals are subject to this kind of judgment most often. For instance, you never hear anyone saying to someone going on a vacation, perhaps an expensive vacation, “Well, instead of going on vacation you could have contributed that money to …” Or, “Instead of buying that tv, or stereo,” or anything at all practically, “you could have given that money to …” No one ever says that. But if I spend money for a medical procedure for my cat there are people who tell me I could be giving that money to save the lives of children, to cancer research, etc. If I contribute to any kind of animal welfare organization, (and I do contribute to other charities) it’s like I’ve allowed someone to die.

Again, no one will argue that there is always something better you can be doing for the world with your money, time, or fame if you have it. But unless you are going to apply this logic to everyone and to yourself, shut up. There are all sorts of ways to make a better world, and making this kind of judgement isn’t one of them.

Also, watch this video and tell me that animals are not worth a portion of our time and money.

I walked by this shoot in Washington Square Park. It looked like some low budget (perhaps student?) reality tv show. 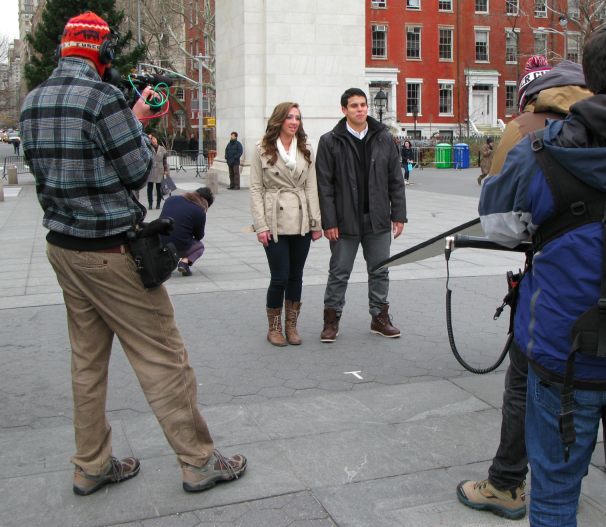 6 thoughts on “Points I’ve Been Meaning to Make”