My friend Howard read my post about the new show, The Following, and sent me the following message:

The Following was just stupid, another one of these “being evil gives you superpowers” plots.

Now I’m mad I didn’t make that point first. I understand that for the sake of drama murderers have to be portrayed as smart, creative, and almost supernaturally capable, but in reality they’re almost never brilliant masterminds. I spent a few years studying murder for my book about the NYPD’s Cold Case Squad, and God was that research an eye-opener. Of course there are exceptions, but in general murderers are stupid. They’re inept in pretty much every area of life, including murder which they frequently bungle (I wrote about one case where they killed the wrong guy.) Murderers are the opposite of confident and powerful. They’re usually the most insecure people ever and they often kill because someone has embarrassed or made them feel ashamed in some way. Instead of addressing the insecurity they have to eliminate the reminder, the person who drew attention to whatever it is that made them feel bad about themselves.

Murderers don’t educate themselves. They don’t eat well or exercise and it shows. They’re ignorant, out of shape, have bad skin, and many kill because they drank too much, or did some nasty drug, not that they’re charming, wonderful people when sober.

Also, chances are pretty good that you’ve interacted with someone who has killed another human being and gotten away with it. It’s disturbingly easy to get away with murder alas, and at least a third of the murders in this country are never solved. (That percentage is actually a lot higher I’ve learned, I just can’t give an exact figure. A case is closed when the police make an arrest, but if it turns out they arrested the wrong person, or they later lose the case, they don’t go back and adjust the numbers.)

Note to murderers: Please don’t feel like I’ve dissed you and now you have to kill me to save face. If you are smart than clearly I wasn’t talking about you. But please don’t kill ever again. Thank you in advance.
——

I was walking down Staple Street, a favorite street of mine downtown, and of course I passed by a photo shoot. Can’t walk out the door these days without coming across one shoot or another. 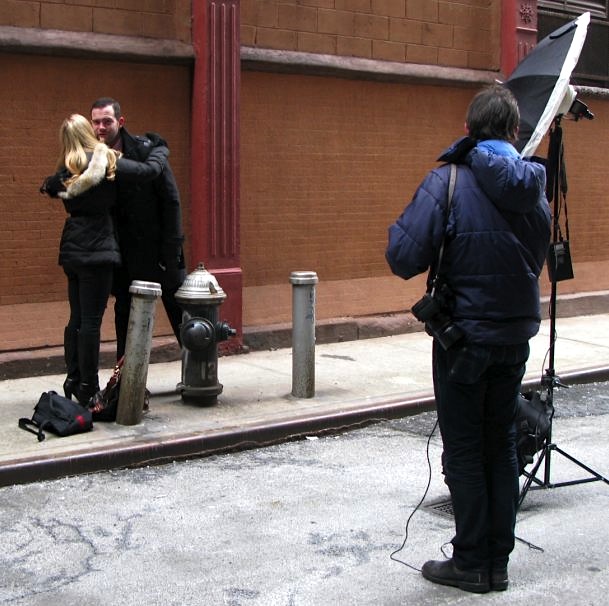 Models All Over the Place

4 thoughts on “Murderers are Stupid, Generally”