I can’t believe I just wrote that title. I grew up in different tv times, when you were lucky if there was one decent show on each night, never mind great.

Recently I set my DVR to record the new series The Following, and then cancelled it after only one episode. Trust me, I would not have passed on the opportunity to watch Kevin Bacon every week lightly. If they were torturing puppies and dogs in the first episode, I didn’t want to know where they were going to go from there.

Then I had a busy week and little time to watch tv. When I finally sat down on the couch the list of shows I’d recorded was at least three screens long. It would have taken an entire weekend of nonstop watching to catch up. That’s insane. My ever-growing to-read pile of books is probably going to take a year. Plus all those studies about the effects of sitting for too long? I’d be dead by Christmas.

I started culling. It’s not like the shows I deleted weren’t very good. In fact, some of the shows I saved are only okay. And it kills me to think of all the great shows that I never watched in the first place (The Wire, 30 Rock, Justified, the list is endless.) Here’s how I decided: which shows did I want to watch first? And which ones, much as I might love them, or things about them, or someone in them, felt ever-so-slightly like homework?

Among the first to go were Nashville, White Collar, The Americans, and others I don’t even remember now. On the chopping block are Revenge and Raising Hope. I can’t believe Raising Hope is even in this position (Garret Dillahunt!) but it’s always surrounded by The Mindy Project (which I have come to adore) and New Girl, and I must admit I always go straight to those first. Revenge is going to be hard to let go of, and maybe I won’t in the end, but, but, I have books to read!

All of this said, television has grown up. It is the most exciting, relevant, ever-evolving art form we have now. I still love books! And that possibilities-expanding New York Times piece Snow Fall: The Avalanche at Tunnel Creek certainly points the way to how thrilling ebooks should get.

Oh Jesus. Because tv has gotten so incredible, it’s drawing more and more amazing talent, so it’s only going to get even better, and that will make it still more painful to decide which to watch and which to delete. Damn you great television!
—

Finney (the black one): “You’re going to bite me any second now, aren’t you?”

Bleeck: “Hey, don’t read anything into this. Talk to her. She’s the one who put this comfy cloth down right next to your favorite sleeping spot.” 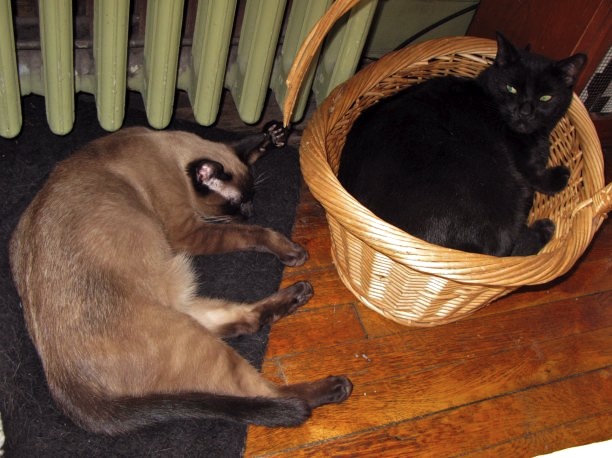 Should I learn to play the xylophone?

2 thoughts on “There’s Too Much Great Stuff on TV”