I just read this in the Times, about the Muslim Brotherhood’s position on women.

“A woman needs to be confined within a framework that is controlled by the man of the house,” Osama Yehia Abu Salama, a Brotherhood family expert, said of the group’s general approach, speaking in a recent seminar for women training to become marriage counselors. Even if a wife were beaten by her husband, he advised, “Show her how she had a role in what happened to her.”

About a proposed United Nations declaration to condemn violence against women, “the Brotherhood said that wives should not have the right to file legal complaints against their husbands for rape, and husbands should not be subject to the punishments meted out for the rape of a stranger.

“A husband must have “guardianship” over his wife, not an equal “partnership” with her, the group declared. Daughters should not have the same inheritance rights as sons. Nor should the law cancel “the need for a husband’s consent in matters like travel, work or use of contraception”

Last week I watched Makers: Women Who Make America. In 1995 at a conference on women that was held in Beijing, Hillary Clinton said, “Let it be that human rights are women’s rights, and women’s rights are human rights, once and for all.” I remembered how for years, decades I believe, women tried to get our government to do something about how women in Afghanistan were being treated under the Taliban regime. Not our problem, was the attitude, when it soon would be. When you have a group of people who do not respect human rights and treat people like they are less than people, one of these days that group is going to be your problem.

If I’m remembering correctly, Makers ended with the point that the next battle for women’s rights would be fought on a the global stage. The complete Times article is here.

And on a ridiculously lighter note, I passed by this film shoot a week or so ago. These guys were shaking this bus while others filmed what was happening to the people inside. 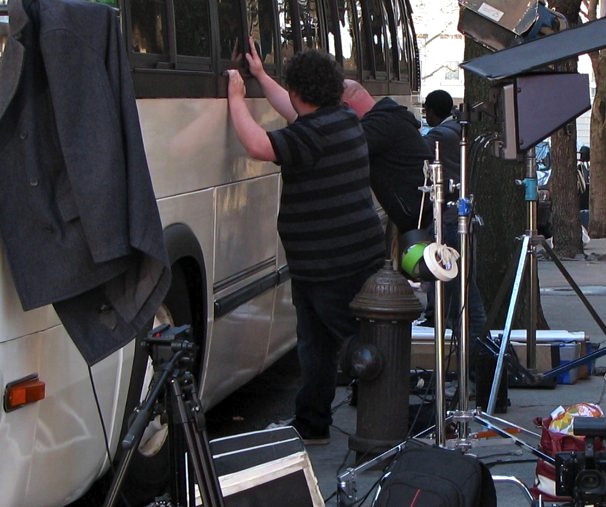 Is it possible to love a refrigerator?

Our love will see us through!