I had made up my mind that today I would post something positive, and I’m still going to, but I cannot let yesterday’s vote against moderate and reasonable gun control to pass. I will, however, let Gabby Gifford’s tough, impassioned words speak for me. Mostly.

She said one thing that stood out for me, well two things. First, when she spoke about the Sandy Hook teachers whispering to the students that they loved them, while at the same time doing their best to hide them. And, “Our democracy’s history is littered with names we neither remember nor celebrate — people who stood in the way of progress while protecting the powerful. On Wednesday, a number of senators voted to join that list.”

As some of you know I’ve been spending some time at the Municipal Archives, looking into the artifacts and records of New York City’s history. I’ve seen how people repeatedly fight reasonable and humane solutions to problems. If something is fair and common sense, people will resist it. I personally think people fight change regardless of what it is, good or bad, fair or unfair, myself included. But that’s another post. Like Kirby Higbe refusing to play baseball alongside Jackie Robinson, the majority of people will initially fight what to us looks like a clear cut, total no-brainer. This is one of them. History is going to look back at us and wonder what the hell we were thinking. Except maybe they will also shake their heads wearily, understanding that once again, sometimes doing the right thing requires a battle.

Read Gabby Gifford’s words. I would be proud to have her lead that battle.

Oh dear, this post is already too long for the things I’d planned to post about. Well, tomorrow. For now, spring! The magnolia tree in the garden in front of Grace Church.

Update: I just realized, here is a beautiful, moving example of people bravely voting to do the right thing on another matter. As it says in the article, I defy you to watch this and not cry. This is my positive thing for today. 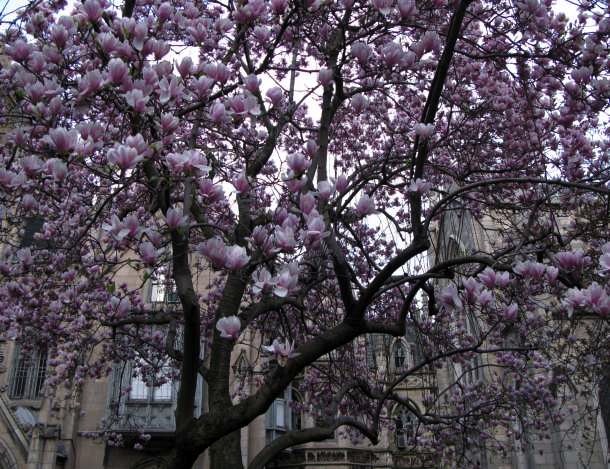 Hurricane Sandy is on the Way

YOU can sing in a choir or chorus by Richard J. Faber