I have this wonderful opportunity to write a piece about singing and I’ve been working like a dog for the past few days. That’s where I’ve been, mostly. I have to say, writing about how singing relieves stress: VERY stressful.

Before I post this link, which I found incredibly moving, I want to say that in general, I hate chants of “USA, USA, USA.” It always feels somehow inappropriate to me. Something about the spirit in which it is done is not noble and uplifting. Instead it always feels like some unseemly sort of chest beating, like everyone else in the world sucks and we’re so great, when we clearly have some serious faults, just like everyone else. For proof of that, look no further than the recent bi-partisan report about how America tortured many people, horribly, and it was worthless on top of it. We torture people. I will say again, we torture people. So we’re all imperfect. I’d rather celebrate the separate, distinct aspects of America and Americans that are great, while at the same time recognizing that other countries are doing and accomplishing great things as well.

That said, I teared up listening to Boston Bruins fans singing the national anthem two days after the bombing in Boston. This is how shows of patriotism are done, and I swear I’m not saying that because this one involved singing. This didn’t feel like chest beating. This felt like a show of love and support. Plus, the fact that you can hear a Boston accent emerge from the voices of thousands was particularly endearing.

Along the lines of recognizing great things in other countries, Iraq produced these two children. This is a expression of sympathy from two Iraqi children which I believe appeared the day after the bombing. I’ll never forget how an hour or so after the bombing someone tweeted that they were about to report that 42 people have been killed, and 257 wounded in Iraq, from 19 car and 17 roadside bombs across the country. In an instant, I got a visceral sense of what people in Iraq and Afghanistan were living with. We had two bombs go off. They had close to 40. In one day. So here are these two children, in the midst of all that bombing, taking a moment to express sympathy for the impact of our two bombs. Look at their faces. Could they be any more … good?

Every once in a while I take pictures of 11th Street, to prove that it looks like how I describe in the book. I say how beautiful and lush it is and I’m afraid people will think I’m exaggerating. 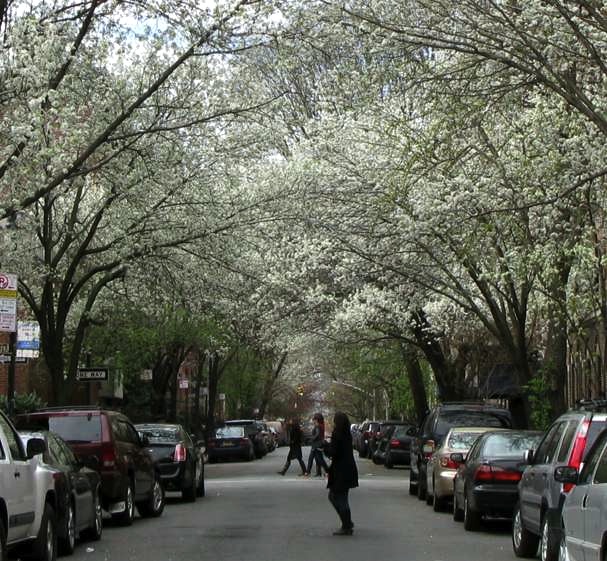 My Spot at Washington Square Park

4 thoughts on “I Do Not Like When People Chant U.S.A.”