I’m not sure if I’ve told the story of how I got the stove pictured below. When I first moved into my apartment (around 1985) the apartment next door to me was empty and it remained empty for years. After a while I started using the door to the unused apartment as an art project. I’d put up signs like “Office of the InterGalactic Fabulous Losers League.” Once I dressed it up as if it was a crime scene, with yellow tape and keep out signs. I’d change the signs from time to time until one day someone started pounding on my door and screaming. I couldn’t understand a lot of what she was saying, but she was pounding so hard and savagely I almost called the police.

“OPEN THE DOOR! OPEN THE DOOR!” Right. Eventually she pulled herself together enough to tell me she lived in that apartment and to stop putting signs on her door. But I’ve lived here for years, I yelled back through the door, “and in all the time I’ve been here no one has ever gone into that apartment.”

Turned out she was warehousing the place, (paying rent on it but not living there). The apartment is rent stabilized and you’re not allowed to warehouse rent stabilized apartments. She was mad because my signs were drawing attention to the fact that no one was really living there. I didn’t know what her story was, so I promised to stop.

Not long after, someone told me this story about the apartment, and I have no idea how much, if any, is true: A young family lived there, a cop, his wife and their infant daughter. Sometime in the 1950’s or 1960’s the cop was killed in the line of duty. His wife picked up their daughter and fled the apartment, leaving behind most of their belongings. She never returned. Apparently she held onto the place and continued to pay rent every month, year after year, decade after decade, and the person pounding on my door was their now grown daughter.

A few years later I heard the super frantically trying to get into the apartment. Something was leaking inside and flooding the apartment below and he was desperate to get inside and fix it. He managed to break the lock and we both entered the apartment. It was like a scene out of Great Expectations and the home of Miss Havisham.

It looked exactly like you’d expect if the stories were true. We stepped back in time, to an apartment from the fifties, except someone had allowed it to slowly decay and fall apart. The wall paper was coming off in great big strips, everything was crumbling and falling to pieces, the mattress in the bedroom looked like it would disappear into dust if I touched it. I have to say though, it did look like someone must have come in every few years to clean it. There was dirt and cobwebs, but not as bad as I think it would have been had it been absolutely and completely abandoned for thirty or so years.

In the kitchen was this beautiful stove. It was love at first sight for me. “If you can move it, you can have it,” the super told me. I called my then boyfriend who knew what he was doing. He capped off the gas connection and the two of us lugged it next door into my apartment. I have cherished it ever since.

Also, it was obvious that the apartment was being warehoused, so whoever was holding onto it lost it, alas. But another young family moved in, a very nice family, and their now grown son continues to live there today! 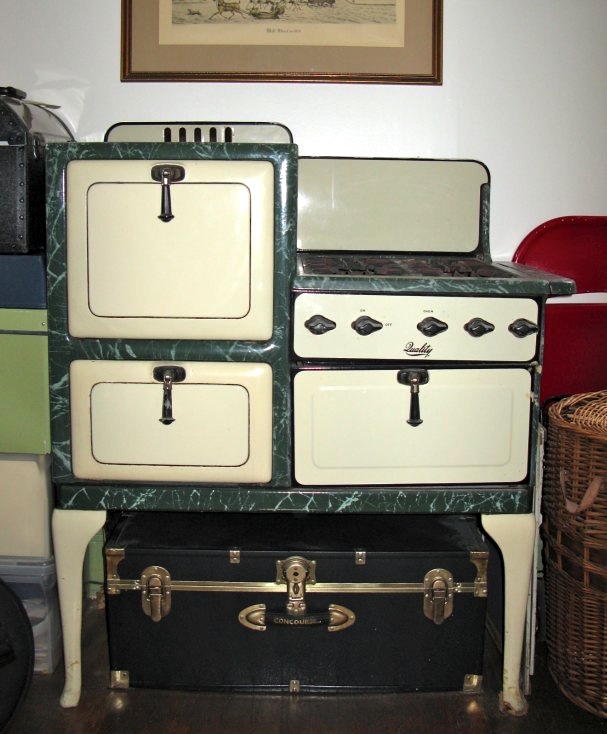