This started out as a post defending the movie Love, Actually. I agree with most of the complaints about it, but I still love watching it anyway. Mostly for Bill Nighy, who I adore and want to marry. Why oh why is he already married?? But I guess I kinda like how fucked up it is on so many levels, perhaps because of my own completely flawed love life. We don’t all get happy endings you know! (Of course one is TOTALLY in my future.)

But then I starting thinking about my favorite holiday tv shows and how I should start looking for them. I did a thorough post about this last year, so I’m going to repost that. Also, my favorite Christmas movies are the Alastair Sim and Mr. Magoo versions of A Christmas Carol, which I watch every year thanks to my sister-in-law Karen! (Thank you, Karen!!)

West Wing: Noel, S0210. This episode has special meaning to me because of the PTSD storyline (I once suffered from this). It was enormously healing the way it was depicted. At the end, when Leo tells a story to Josh that begins, “A man falls into a hole …” I felt a sense of peace I hadn’t felt in years. I went to bed very happy that night.

West Wing: In Excelsis Deo, S0110. The main storyline involves Toby arranging for the burial of a homeless vet, but this episode is moving throughout. Mrs. Landingham’s speech, “I miss my boys,” is so heartbreaking it’s almost beyond tears.

Northern Exposure: Seoul Mates, S0310. The perfect Christmas in a world that, sadly, does not exist. But it makes me happy that it exists in the imaginations of the people who created this episode. In it, all different faiths, or no faiths, are dealt with reverently and respectfully. Every time I watch Holling sing Ave Maria to Shelley I burst into tears. On a singing note (I have a book about singing coming out next year) Schubert’s Ave Maria is a surprisingly tricky piece to sing and Holling sings it absolutely beautifully.

Doctor Who: A Christmas Carol, S0600. I am new to Doctor Who, and I know they do a special Christmas episode every year, so there are probably many more great ones. But this is the one I know. Also great for people who love singing, speaking of singing. Singing saves the world. Based on my research, this is not all that far from the realm of possibility, if only more people sang.

Bones:  The Man in the Fallout Shelter, S0109. Everyone is quarantined in the lab over Christmas and therefore separated from their families. I love this episode because it shows a range of “families,” down to Bones, who doesn’t have one. The mystery that Bones solves at the end is lovely and redemptive, as is the very last scene of Bones alone, and the gift from her childhood that she’d previously never opened.

Roswell:  A Roswell Christmas Carol, S0210. Why isn’t this show remembered more? It was really quite special. In this episode, Max uses his ability to heal, after having failed to save a man in the beginning of the show. I just realized, all the best Christmas episodes are about redemption. I guess Dickens is responsible for solidifying that trend forevermore.

Buffy the Vampire Slayer:  Amends, S0310. Like the Bones episode, I like this because it shows a range of imperfect holiday/family experiences, down to Xander, who sleeps outside on Christmas Eve in order to avoid his family from hell. Buffy and Angel have a bitter fight at the end, which isn’t so much resolved as put on hold, when … something happens … I don’t want to give the ending away. The lack of resolution is so like life. Sometimes, we put aside our fights and complaints, and acknowledge the larger truths. In this case, it didn’t happen so much because the characters were able to summon the strength or perspective in order to do so, it was a gift.

Sports Night: The Six Southern Gentlemen of Tennessee, S011. Aaron Sorkin is the King of Christmas episodes. I’ve got two West Wings and two Sports Night episodes on my list. Truthfully, I don’t really remember this episode well, as is the case with the rest of the episodes on my list, I just remember liking them. However, I do remember being moved by the ending of this one.

Grey’s Anatomy: Grandma Got Run Over by a Reindeer, S0212. When Grey’s Anatomy was at the top of its game, the Izzy character was still utterly charming, and George was still on the show. I’m hoping this is the one where they all lay underneath the tree, looking up through the branches and lights.

The Big Bang Theory: The Bath Gift Item Hypothesis, S0211. Don’t get me wrong, I still love this show, but the first two seasons were sheer brilliance, practically all the time, and this episode was no exception.

Newsradio: Xmas Story, S0210. I’m not going to give anything away, but man oh man is this going to make you miss Phil Hartman, and the absolutely pitch perfect ensemble that made up this show.

Bones: The Santa in the Slush, S0309. I love this episode for the end, which, once again, I don’t want to give away.

Studio 60: The Christmas Show, S0111. If nothing else, this episode aired not long after Hurricane Katrina and the musicians from New Orleans playing O Holy Night at the end was terribly poignant. I’m guessing it still might be.

X Files: How the Ghosts Stole Christmas, S0606. Another episode I don’t remember very well, but I loved this show, so I’m putting it on my list.

Veronica Mars: An Echolls Family Christmas, S0110. I have no memory of this! But it’s on my re-watch list, because it must have been great, and maybe I had a head injury after seeing it or something.

This is from a photo shoot in the meat packing district. I live in movie and photo shoot central. 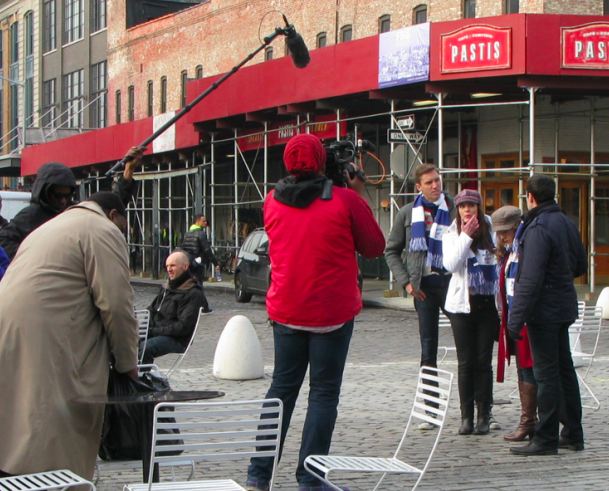 5 thoughts on “My Favorite Christmas Shows”