We have some splendid pieces on our spring program. There’s the Mozart Requiem, Randall Thompson’s The Last Invocation (which I wrote about in my singing book!) and The Beatitudes by Arvo Part.

And then there’s the Psalm 90 by Charles Ives. We ran through it for the first time last night. I don’t know. It’s beautiful in the last few minutes of the piece, but everything leading up to it?

I trust John Maclay’s judgement though (he’s the director of the Choral Society of Grace Church). Also, I love this one line of instruction that Ives wrote to the singers, about the feeling he’d like to elicit (presumably): “As evolution, quiet, unseen and unheeded, but strong fundamentally.”

Coincidentally, every time I walk to and from choir I pass by where Ives lived when he was first married (70 West 11th). For those who haven’t read my book, I have a section where I describe my walk to choir practice. Except, I see my description of his home was cut! It’s very unlike me to have left the Ives part out because one, he was a composer and two, he lived next door to a cemetery (the Second Cemetery of the Spanish and Portuguese Synagogue).

I took some pictures. My camera isn’t so great with night shots, but that works well when shooting a cemetery, it turns out. 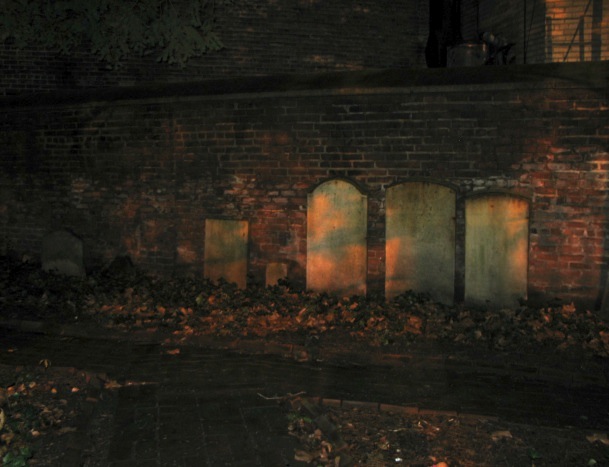 The cemetery is marked with the dates “1805 to 1829” and has twenty-five graves that I can count. I wonder if there’s anyone left alive who still visits the grave of an ancestor here? Here are some of the people who are buried there (most of the remains were removed when the cemetery was reduced to build 11th Street). Oh, here is more information about the cemetery and few more names of those buried there. Victims of yellow fever and malaria were buried there initially. 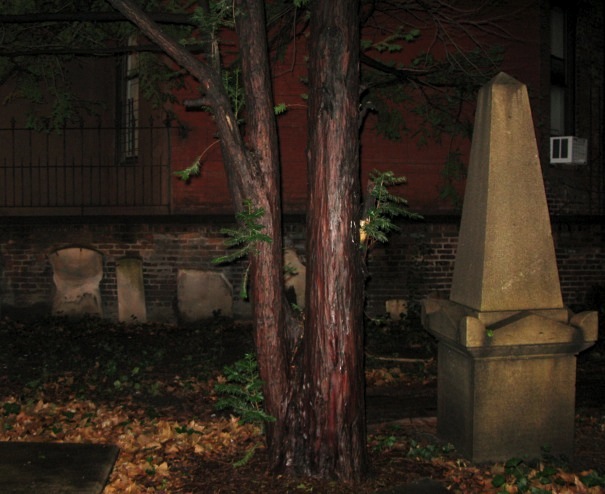 Ives was also an insurance executive, and his firm, Ives & Myrick, used to be at 38 Nassau Street. I just looked, and there’s a new-ish building there now, alas.

PS: As we went through Psalm 90, there were a few spots where I heard the music from the 1951 version of A Christmas Carol, the one with Alastair Sims. The composer for that score was Richard Addinsell. I wonder if he was influenced by Ives.

A lot of people repeat this quote from Ives’s wife Harmony, saying that the Psalm 90 was “the only one of his works that satisfied him.” But I have been unable to find the source of that quote.

Another cemetery shot. I have to see if it is ever opened for visitors. 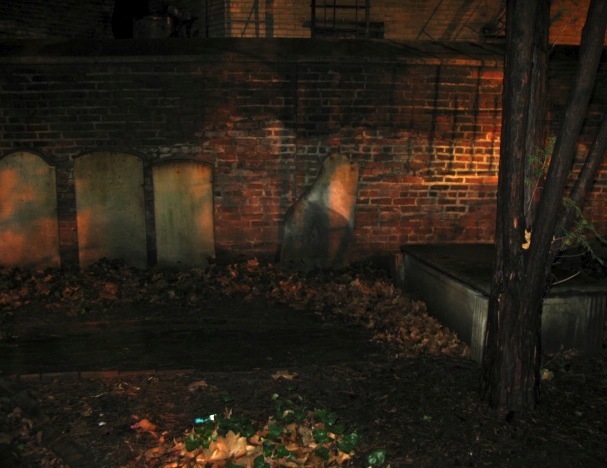 Feeling Gloomy (As Opposed to Groovy)