No one can. He’s the perfect judge.

He tells the truth without the meanness, unlike Simon, and without apology, unlike Jennifer Lopez. I love that he tried to explain to Jennifer what a pentatonic scale is. Next time let him finish. He should give more quick lessons like that. It may sound boring at first—a pentatonic scale??—but if things like this are explained in a non-tedious manner, and I can’t imagine Harry Connick, Jr ever being tedious, music theory and music history can help you become a better singer.

Once, when we were working on Haydn’s Lord Nelson Mass, John Maclay (our director) told us how just before Haydn got to work on this particular piece his benefactor fired the entire wind section of the orchestra. “Now what,” Haydn must have thought. So, in certain sections he substituted our voices for those missing instruments. “You’re there doing what a clarinet or oboe would have been doing,” John explained. It was not only a fun fact to know, it helps you sing. If the audience knew this too, like us they’d enjoy the music even more. Knowledge takes music up to 11.

Honestly, I’m pretty blown away at how much I like Harry Connick, Jr. Last week they had a quick shot of him playing with Jennifer’s Lopez’s children and he was so amazing with them I thought, “Oh for the love of God, he’s probably a great dad, too. On top of everything else.”

I started talking about him on Echo and a friend wrote about how she used to see him in the 1980’s at the Knickerbocker in the Village, right before he became famous. Here is part of her wonderfully evocative description.

“He ritualistically set up a tiny cassette player before he started, to record what he did each time … Sweet, serious, played for at least an hour even though there might be ten people there, full volume, full intensity, he’d sing, then pack up his little recorder and go home.

“It was an interesting lesson in taking one’s endeavors seriously regardless of the context, lack of immediate adulation, etc. A committed musican doing his gig every week and trying to keep getting better.”

Then she pointed out this post that was written by someone who was a waitress there at the time. It explains my reaction to him (I also want to know more about the singer Bibi Farber, who wrote it). Now I feel free-er to gush about him, it’s not just me. It also made me appreciate even more the reaction he had to the kid on American Idol who said he was going to do a jazzier version of a Michael Jackson song and then proceded to sing a version that had nothing jazzy about it whatsoever. Those kids trying out for American Idol should pay very, very close attention and follow Harry Connick, Jr’s example of how to work hard and grow as an artist.

I’d given up on American Idol, and I was only watching out of sheer inertia, maybe hope. But Harry Connick, Jr is making it good again.

These are choral singers at a rehearsal at Carnegie Hall, being conducted by composer Eric Whitacre. Whitacre has their complete and undivided attention. 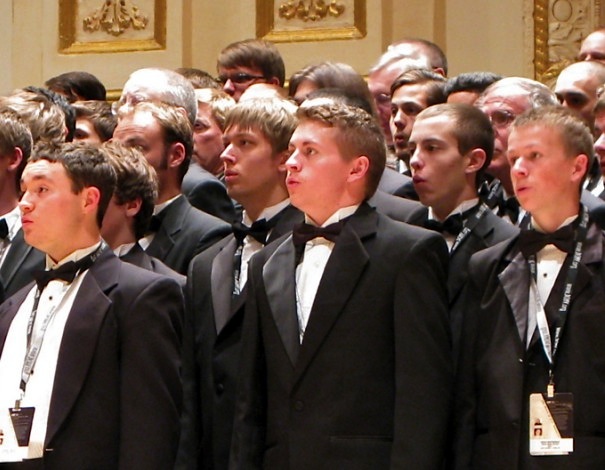