I’ve been meaning to post about what goes on when you are invited to do a TEDx Talk.

The first thing that happens is you’re sent a set of rules about what you can and cannot do, and guidelines in general about what makes a good talk. You’re told that you have to give a memorized, prepared speech, and you’re asked to submit your speech in advance for approval.

A quick backstory about me and public speaking. When I first started Echo, the social network I started in 1989, I lucked out when a local news show decided to do a piece about us. I got my brother Douglas (who was helping me), my boyfriend, and someone else who was part of Echo to gather in my apartment to be part of the piece. They were all great. I froze. Because I was the one who started Echo the news guy wanted to feature me. So he kept trying and trying to get me to relax and talk. He eventually gave up. I signed up for a public speaking class the following week.

The problem was the class taught us how to give memorized, prepared speeches, and I quickly discovered that it’s very hard to give a prepared speech and not sound like you’re reciting, which is tedious for the audience. Actors can do it. I cannot. So I came up with a modified version of giving a speech. I plan the main points I want to make, memorize those, and then wing it in-between. This has always worked well and this is how I’ve done it ever since.

Now here I was being told to give a planned and rehearsed speech. And you have to give it with absolute timed precision. You’re instructed to rehearse it every day until you are sure you can give it within your allotted time. I had 15 minutes. You’re also told not to move around on the stage, to not have a lot of text on your slides if you’re going to have slides, to not start with a bunch of stats, and to never look back at your slides, something I generally do to remind myself where I am.

I write my speech, get it approved, and start rehearsing. I’m terrible. I start asking people for pointers. I film myself to see the worst things I’m doing. I give my speech to friends and ask them to tell me how to make it better. I talk to people who have given TED talks before and ask for helpful hints. Bit by bit I start to suck less.

The night before the conference they have us all come in for a dress rehearsal. I was thrilled because I was so scared and I thought having the chance to do it once before the real thing would help with my nerves. I’d get through it, and armed with the knowledge that I could get through it I’d be able to walk up onto the stage the next day with at least a little bit of confidence.

I blanked out a minute or two into giving my talk. Worse, I stood up there scrambling to get back to where I was in my talk. People waited. Finally I found a place somewhat later in my talk, skipping a whole section. Then I blanked again. And once again I came back in skipping a section. I did this four times. My talk was an incoherent wreck. It was a nightmare.

The next morning same thing happened. I couldn’t get through my talk without continually blanking out and skipping entire sections. I came this close to calling the organizers and telling them I had developed a high fever overnight and I couldn’t come in. But I knew that the self-loathing that would generate would beyond enduring. For the rest of my life anytime I felt doubt or insecurity my mind would go right to, “Remember that time you chickened out and didn’t give your TEDx talk??” Until the day I died it would be incontrovertible proof of my hopelessness. I had to go through with it.

When I climbed that stage to give my talk, I was absolutely certain I was walking up to what would become the most public humiliating experience in my life. If you look at my video you can see me look down at the beginning and take a deep breath. What I’m saying to myself is, “There’s no getting out of this now. This is going to be bad. Let’s just get it over with. Oh God oh God oh God oh God.”

I looked up, spot lights were shining in my eyes and I couldn’t see anyone in the audience. I had to begin by pretending to be able to see people! Maybe that helped me, I don’t know. You decide. If you haven’t seen it already, here is my TEDx Talk. 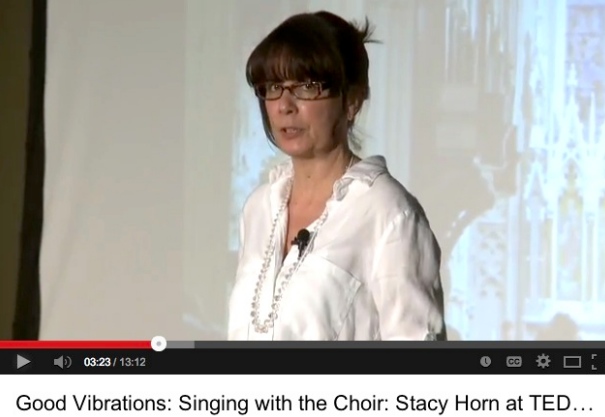 Saddest Fact in New York and Then Some Happier Links

2 thoughts on “Behind the Scenes of a TEDx Talk”