Leaving aside for now the fact that girlchoirs don’t get the same attention, I just heard about a new movie called Boychoir, which has an amazing cast and is about to start filming. I loved the French movie, The Chorus, and the actor who played the director of the chorus, Gérard Jugnot. You don’t have to be a choir person to love this movie! Jugnot will make you weep.

Chorus America recently published a Best Picture Nominees For People Who Love Choral Music, and The Chorus is number 1. I picked Amadeus because of this scene, where Mozart is composing his Requiem. Just watch it. You’ve got to trust me on this. It shows Mozart composing the Confutatis maledictis section, one of the most exciting pieces of music EVER. Although it’s fiction I love how they show him build it piece by piece and then you hear the marvelous whole. Please watch it!

My choir is singing this piece in the spring and we’re working on it now. Our director recently had everyone sing along with the tenors and basses on the Confutatis maledictis. It was thrilling! Lucky tenors and basses to have this to sing. It’s just so magnificent and electric. We were told that only ten sopranos and ten second sopranos and altos will be singing the salve me part. I am the longest of long shots and don’t expect to be picked for this, but a girl can hope.

Back to boychoirs though, I wonder if I have posted about this before, but I love and now own the choir song sung in the movie The Bishop’s Wife. It’s called O Sing to God and it’s sung by the Mitchell Boychoir.

There’s one boy who always gets my attention and I tried to find out who is he, but so far no luck. I haven’t tried that hard really. The movie was made in 1947, and I’m guessing he was 15 years old, except I’m terrible at guessing children’s ages. Maybe he’s a little older. But that would make him 79+ now.

Here’s a screenshot, but you can also see him here. I cued it so when you click on the link it starts at the moment he appears. 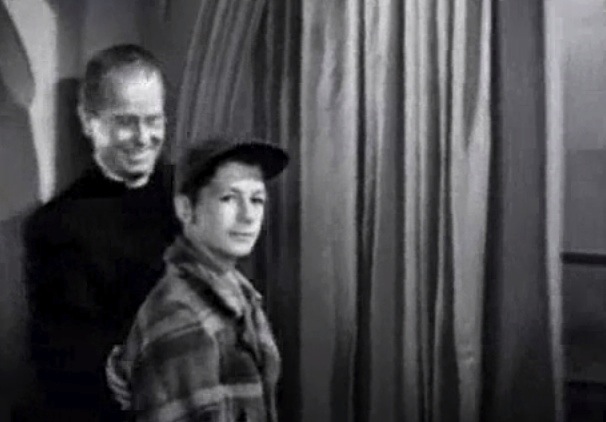