Is anyone watching The Bachelor? How on earth could anyone fall for Chris? He seems perfectly nice, but come on. He said he couldn’t follow one of his dates because she talked too fast. Except she was speaking at a perfectly normal speed, and anyway she wasn’t talking about international economics! What she was talking about could have been followed by a 1st grader.

I’m bringing this all up though because I want to talk about contestant Kelsey’s comments after telling the story of the unexpected death of her husband. First, she couldn’t remember the name of his cause of death. Who could ever forget that?!? Then her utterly bizarre comments to the camera after telling Chris what had happened. Someone on another blog attributed them to a sort of PTSD, which made sense to me.

What stood out to me was how her comments revealed something about what goes on in the background, and how the producers of the show encourage people to think of their lives. A quick recap. After telling about what happened to her husband Kelsey said, “Isn’t it amazing? Tragic, but amazing. I love my story!”

She goes on to say: “I know this is a show about Chris, but this is my love story, too. This is the unfolding of somebody who’s been through something so tragic and you get to watch her pick up the pieces and grow into another person and into another relationship.”

She’s has taken her story and shoe-horned it into a narrative that will fit this show and now she intends to act it out. I convinced there’s a producer in the background saying, “If we made your story into a movie, what would be our pitch? Who is the heroine? Who is the antagonist? How can we sell YOU?” I could see how someone who is grieving might latch on to distancing herself in this way from what happened and from her feelings.

It’s been a billion degrees below zero lately. I took this on Roosevelt Island. I wish I had zoomed in on the beautiful icy trees. 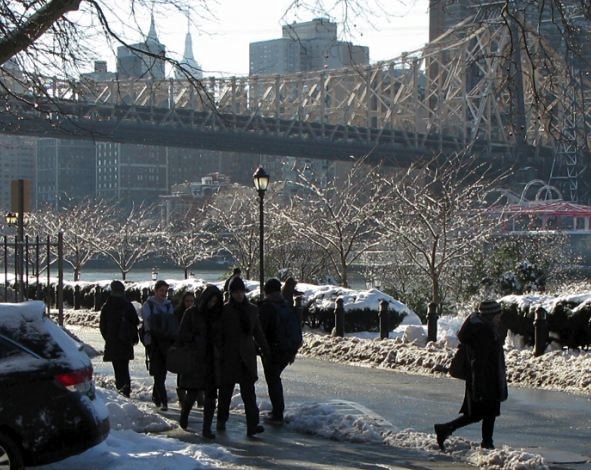 Things That Have Made Me Happy Recently

3 thoughts on “The Bachelor”