It’s a rare moment and I got it on film. Well, pixels. Finney lets Bleeck sleep near him as long as there’s a barrier of some sort between them, like Finney is in a basket. But when we are all on the couch, there are prescribed spots that do not change, which usually involves them being on opposite sides of the couch with me in-between. I’m the barrier.

But last night they curled up within inches of each other. In that moment, Putin felt a twinge of doubt and reached for the phone to call his troops back, religious extremists all over the world looked at each other and thought, ‘alright, I don’t agree with you but why did I think I had to kill you again,’ and American right wing extremists gasped and said, “Good lord, we’re not just damaging our country, we’re damaging the future. Did you read the latest about global warming??” Then Bleeck leaned over and tried to bite Finney, Finney jumped off the couch, and the spell was broken. 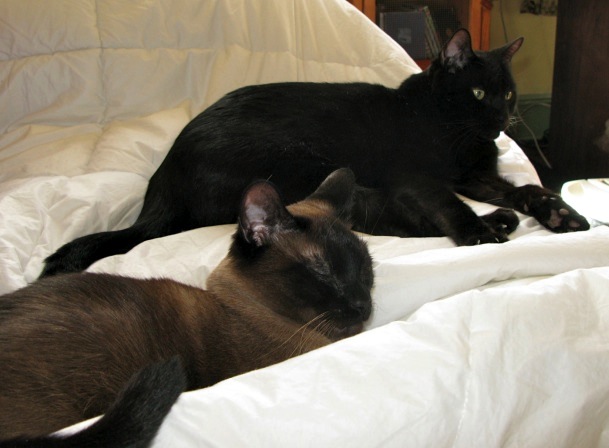