I’ve mentioned before that I’m addicted to the rescue efforts and videos of Eldad Hagar, who founded Hope for Paws. I’ve always had cats, but I love all animals, and it just lifts my heart to watch these videos, like this one. If you are ever having a bad day, watch a bunch of Eldad’s videos. It’s pretty much impossible to not feel at least a little better afterwards. For the record, although Hope for Paws focuses on dogs, he rescues other animals and even once rescued a donkey.

But I was thinking about how even if a dog has been abused and abandoned and has been living on the streets for years, they rehabilitate quickly. Very soon they are loving dogs, living happily in someone’s home. It’s the best part of the videos, watching them get bathed, and all their wounds taken care of, and then seeing them in their lives afterwards.

I know cats who are born feral will most likely stay feral unless there’s some sort of human intervention while they’re still very young. But what about lost or abandoned cats who were once someone’s pet? I just don’t hear much about them. Do they die? Get subsumed into a feral colony? Do the ones who are found and rescued live happily with us again?

A missing dog from my block. Very sad. The owners put flyers everywhere in the neighborhood. I wonder what happened. The flyer says he was taken. Very different than lost. 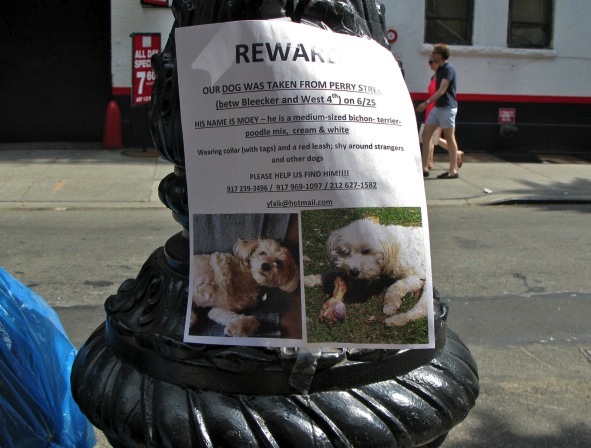 Thank you, Cori and Jimmy!